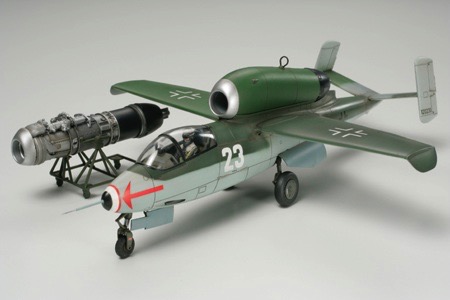 Following the Messerschmitt Me262, we release a second WWII German jet fighter with the Heinkel He162 Salamander. This truly innovative machine, which firmly established Germany as possessing the most advanced aviation technology of the time, deserves a high quality and richly detailed model to do it justice.

About the He162 Salamander
While the Heinkel company pioneered jet technology with its successful test flight on August 8th, 1938, it lost out to the Messerschmitt Me262 which became the first operational jet fighter. A second chance came in September 1944 when the Luftwaffe requested proposals for a single-engine jet fighter that was simple to control and produce. Heinkel's proposal was chosen because it promised a mass producible jet that could be flown by relatively inexperienced pilots. Rushed from proposal stage to finished prototype in 3 months, the He162 was first deployed to a base near the Danish border, but with only 1 month left until the end of the war in Europe, came too late to demonstrate its combat potential.