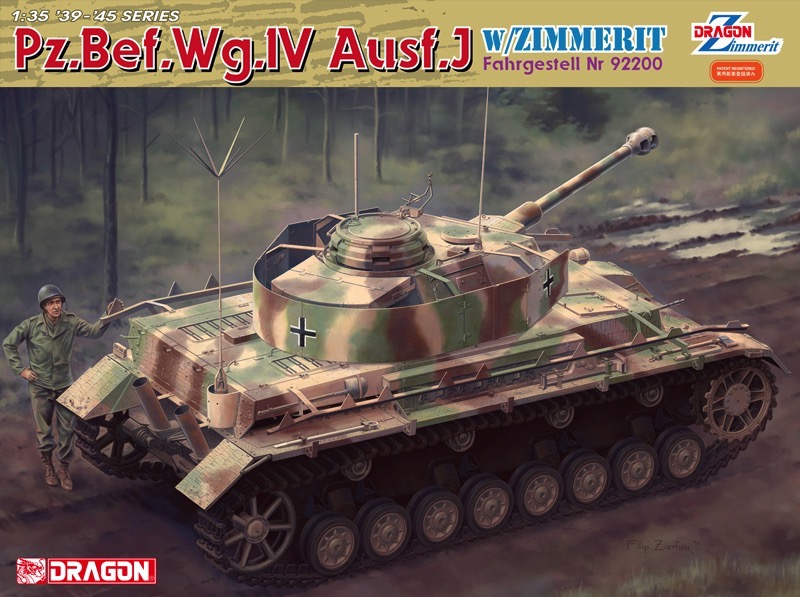 Dragon offers a complete lineup of the popular Panzer IV family tree in 1/35 scale, but the company is gradually filling in some of the smaller gaps with special variants. This is the case with the newest Panzer IV kit from Dragon, an Ausf.J command tank. In fact, Ausf.J was something of a retrograde from the Ausf.H as construction was simplified to speed up production as the end of the war loomed and as materials became scarce. The Panzerbefehlswagen IV (Pz.Bef.Wg.IV) was a dedicated command tank with additional radio sets installed, mounting racks, transformers, extra antennas and an auxiliary electrical generator. At the same time, ammunition stowage had to be reduced to 72 rounds to house the extra communications gear. A total of 17 Pz.Bef.Wg.IV vehicles were built on the Panzer IV Ausf.J chassis in August-September 1944, while another 88 command tanks were based on other refurbished chassis.

This 1/35 scale plastic kit features a number of newly tooled parts needed just to recreate the Pz.Bef.Wg.IV Ausf.J. One example is a brand new antenna stowage box on the right side of the hull. To accommodate this new box, two side skirt brackets had to be redone as well. Furthermore, there are new photo-etched metal parts to represent various antenna mounting plates, as well as a new rack on the hull side for stowing spare track links. Additionally, there are two separate cupola designs, modelers are able to choose which version they want to employ on their particular command tank. For those model-makers wanting to take command of a new Panzer IV project, this Pz.Bef.Wg.IV Ausf.J is a timely release!