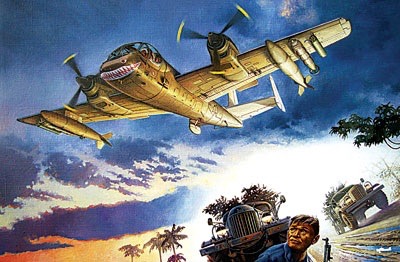 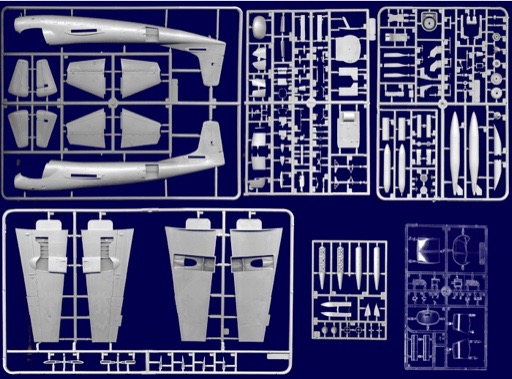 At the prototype stage, the OV-1 Mohawk was intended to be multipurpose, and surveillance was one of the prime tasks for a machine of this category. The OV-1B which was equipped with SLAR radar would carry out the functions of radio electronic reconnaissance. However, at that time the U.S. Army conceived a requirement for a reconnaissance plane which could conduct direct infra-red surveillance in the zone of operations. The OV-1 Mohawk was outstandingly suited to this role, therefore the decision was made not to build a new prototype, and instead the new equipment was installed in a production OV-1A.

The infra-red equipment consisted of the UAS-4 heat-sensitive sensor and a data transmitter mounted in special containers. A panoramic KA-60 camera was also mounted in the nose which could scan a 180 degree sector in front of the plane. The Red Haze infra-red imaging equipment was very sensitive to all kinds of thermal signature on the ground, be they lights in camouflaged military camps, working vehicle engines, all kinds of armor and so forth. In the environment of dense vegetation which covered most of the territory of Vietnam, where the war had already begun, this feature of the OV-1C Mohawk (as the new variant was now officially known) appeared to be especially useful.

The first OV-1C machines had short wings, just as had the OV-1A version, and also air brakes. Later, longer wings were fitted to the OV-1C similar to those of the OV-1B reconnaissance plane, and the air brakes were deleted. This OV-1 Mohawk variant readily stood out among all the other versions of the 'C' with special containers over the wings near the fuselage. These contained special flares of the A4 or B6 type, with 54 in each of the two dispensers. The flares were fired during night photoreconnaissance missions when the infra-red equipment detected thermal signatures. The flares illuminated all around the aircraft which is why these photoreconnaissance missions produced better quality results. But the use of this equipment was accompanied by numerous problems and consequently in 1966 it was decided to remove it. Instead the special strobe lighting LS-59 unit was mounted under the wing, which was powered by means of a small wind-driven generator and lit up the lower hemisphere with powerful lamps through special windows in the container.

The OV-1C Mohawk was operated together with the OV-A and the OV-1B by the U.S. Army during the war in Vietnam; one of the earliest deliveries was received by the 73rd Special Aviation Group. In the course of operations the infra-red equipment was replaced by a new and even more sensitive one - the AAS-14 system could detect single gun shots or thermal emissions from recently stopped motor vehicle engines. In 1968 during the special SEAMORE Project some of the OV-1C Mohawk aircraft were fitted with highly classified reconnaissance equipment of unknown specification - the details of this activity of the OV-1C over the territory of Vietnam is still a military secret.

After the end of the Vietnam campaign the OV-1C Mohawks together with other military vehicles were returned to the USA. Some of them were upgraded to the more modern OV-1D standard, thus entirely changing the reconnaissance equipment; some were transferred to training departments; and a small number of the 133 aircraft of this variant were transferred to the Customs Service - their OV-1C basically carried out surveillance of the cross-border narcotics traffic. During the Quick Look I program two machines were modified to the RV-1C standard, but the project did not progress beyond experimenting with the newest radio-electronic technologies.

Manufacture of the OV-1C Mohawk stopped in 1967. In the circumstances of the Vietnam campaign it played an uncommonly important role, supporting the Army and seeking out concentrations of the opponent's forces in the theater of operations and beyond its borders. However, later on the need for this kind of aircraft greatly decreased, as radio electronic reconnaissance technology became even more sophisticated. The OV-1C Mohawk endures in aviation history as one of the most effective reconnaissance planes of its era.