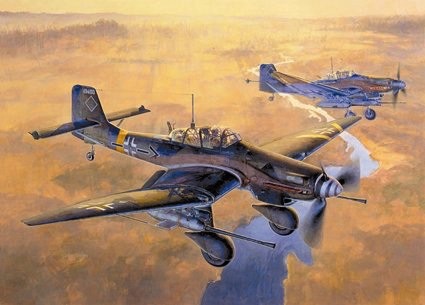 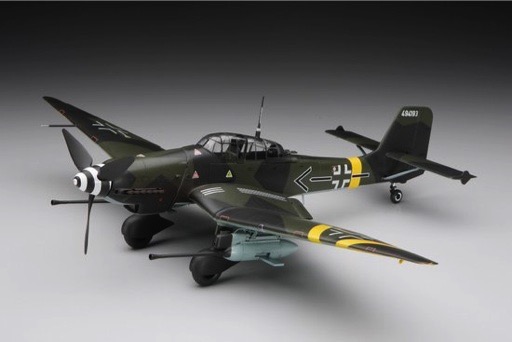 This newly tooled kit will come complete with several outstanding features;
Markings: About the Ju87:
The Junkers Ju 87 or Stuka was the most famous Sturzkampfflugzeug (German dive bomber) in World War II, instantly recognisable by its inverted gull wings and fixed undercarriage.

The Stuka's design featured some innovative features, including an automatic pull-up system to ensure that the plane recovered from its attack dive even if the pilot blacked out from the high acceleration, and wind-powered sirens on the wheel covers that wailed during dives to scare its victims. (A similar technique is shown in the movie Apocalypse Now). Its rugged fixed undercarriage allowed it to land and take-off from improvised airstrips close to the battlefront, giving close support to the advancing German forces.

The Stuka was sturdy, accurate, and very effective, but also slow, unmaneuverable, underarmed, and vulnerable to enemy fighters. The Germans learned in the Battle of Britain that air superiority must be obtained before ground attack aircraft could be effectively used. After the Battle of Britain, the Stuka was little used in western Europe, but it remained effective further south where Allied fighters were in short supply (notably in the attacks on Crete and Malta), and was used in vast numbers on the Eastern Front, although the steady rise in Soviet airpower as the war progressed meant that Stuka squadrons suffered very heavy losses.

Hans-Ulrich Rudel was the most notable Stuka ace, and in fact the most highly decorated German soldier of the war.