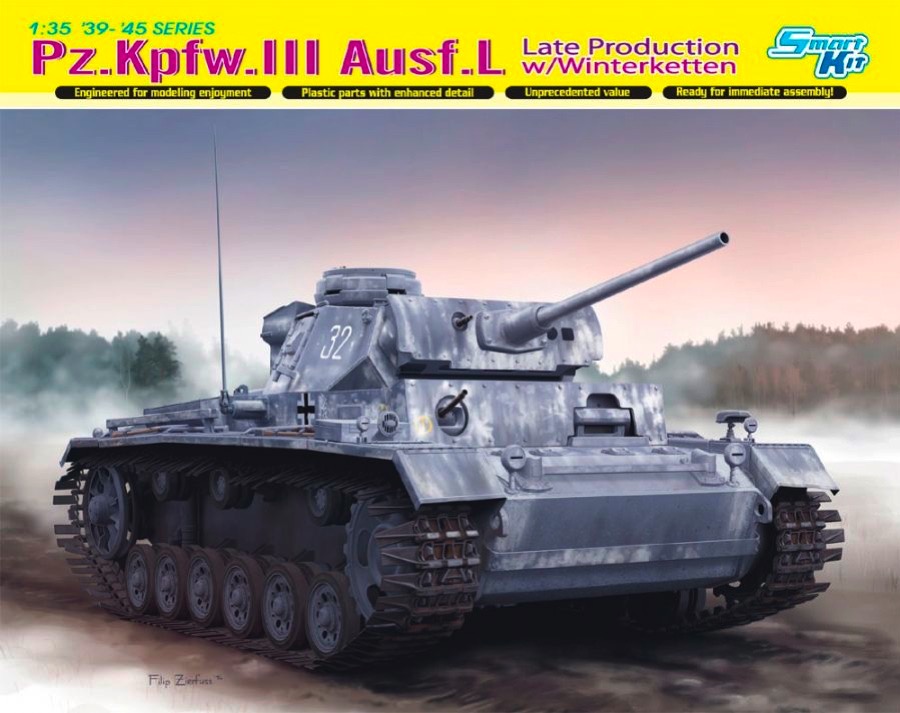 DISCONTINUED This product has been discontinued
and is no longer available.List price: $71.50
You pay: $48.39
(All prices in U.S. Dollars)

Features: The Panzer III was a medium-class tank that, at the outbreak of WWII, was designed to be the primary platform of the all-conquering panzer divisions. However, with the advent of more heavily armored and up-gunned enemy tanks, the role of the Panzer III became secondary to that of the Panzer IV. Production finally ceased in 1943. One of the later models to be produced was the Panzer III Ausf.L, which featured a longer and more powerful 5cm KwK39 L/60 main gun. It also boasted thicker armor, with an additional 20mm-thick layer on the turret and hull front. A total of 653 Ausf.L tanks were produced from June-December 1942 by German factories.

It's the first 1/35 Panzer III Ausf.L medium tank from Dragon. Moreover it comes with something special. This kit offers modelers the chance to build a Late-Production variant with the long-barreled cannon fighting in the depths of an Eastern Front winter. This is because the tank comes equipped with Winterketten tracks, which are carefully represented by a set of convenient Magic Tracks. These extended track links offered armored vehicles better traction in snowy and muddy terrain. Since the Panzer III is based on an existing kit, this model may not offer any newly tooled parts, but the ones it does employ are accurately produced and well-engineered. On behalf of modelers, this Panzer III Ausf.L Late Production kit is ready to get muddy and snowy down in some wintry diorama!