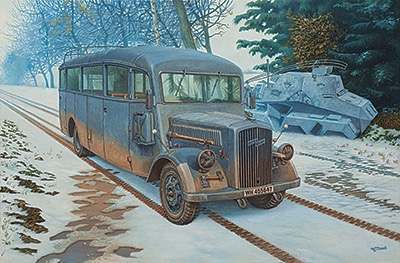 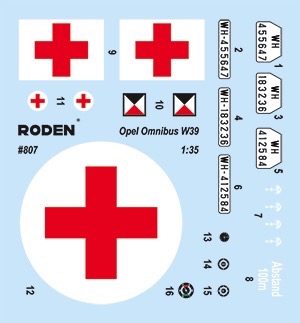 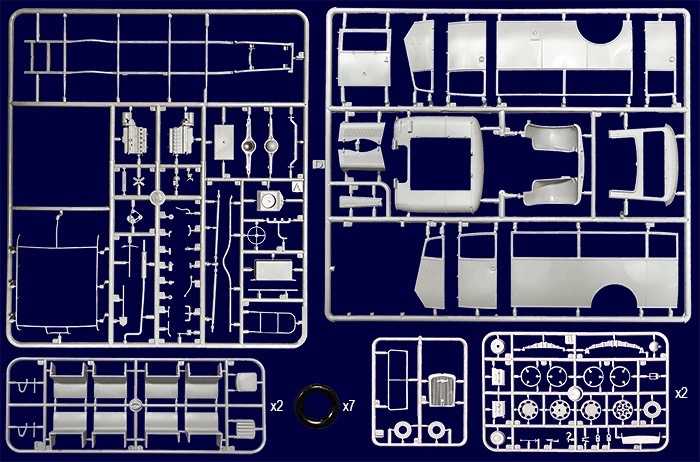 Includes markings for: In 1939 Germany was rapidly preparing for global hostilities. The plans of the German command supposed an instantaneous capture of quite large areas of other countries, and therefore special attention was paid to the question of the greatest possible motorization of infantry units. Besides a large number of different types of trucks which were already in the Wehrmacht's inventory, staff buses also began to be taken on charge, whose main task was the conveyance of officers during offensive actions of the army with a likely prospect of minimal resistance by an opposing party in the conflict.

The practice of building buses on a truck's chassis had existed for a long time, and therefore the most common types of buses which came into the German's inventory were based on the most widely used trucks. One of the most popular trucks at this time was the well-known Opel Blitz, and on its chassis was designed a standard army bus (at the time the more common term for it was "omnibus").

The Ludewig firm which was engaged in designing the bus, was located in Essen and had great experience in the manufacture of civilian multiseat vehicles. The standard chassis of the three ton truck was extended a little bit (up to 4450 mm), and the frame structure was reinforced. The original all-metal body of the new bus was quite elegant in outline, and only the front part where the engine was hidden, and the classic radiator with its distinctive logo, immediately reminded one of its predecessor, the famous "Blitz". Inside the cabin were several rows of seats which could be easily demounted if necessary (transportation of bulk goods, medical equipment, etc.).

Series production of the bus, officially designated the Opel 3.6-47 type W39, started in the second half of 1939, almost at the same time as the invasion of Poland by Germany and the start of WWII. At first, the number of vehicles produced per month was very small, but already in 1940 about one hundred units per month off were coming off the production line in Essen. Series production lasted until mid-1943, when the situation became worse for Germany at the Front, basic industrial materials were in short supply, and as a result, Ludewig had to seriously simplify the structure of the bus. During this period 2,880 units of the early version were produced overall, which were sent both to the Eastern Front in Russia, and to the Afrika Corps of General Rommel in North Africa.

In addition to its main purpose - the conveyance of Wehrmacht officers - buses had to perform various other functions such as those of mobile headquarters, telephone exchange and radio station, mobile bakery and laundry, etc. Special note should be made of their role in transporting wounded from battlefield to hospital - rows of seats were removed and in their place several stretchers with wounded could be easily brought through the back door that opened into the interior, thus leaving space free for the installation of medical equipment.