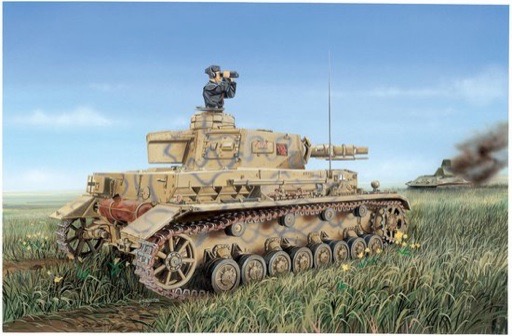 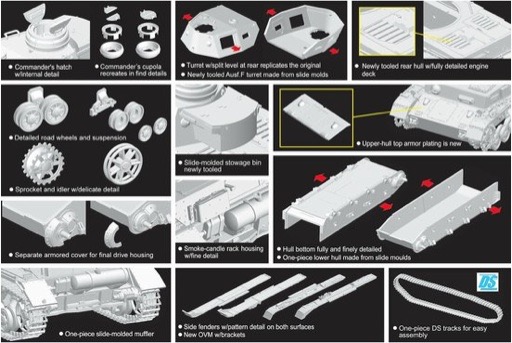 DISCONTINUED This product has been discontinued
and is no longer available.List price: $29.95
You pay: $20.59
(All prices in U.S. Dollars)

"Dragon has now released well over 100 models in its popular 1/72 scale AFV series. As if this wasn't a milestone enough, Dragon is now pleased to announce a groundbreaking release. For the first time ever, Dragon has created a 1/72 scale Panzer IV tank! Building upon Dragon's extensive experience and expertise in 1/35 scale Panzer IV kits, the first release is a Pz.Kpfw.IV Ausf.F1.

The Panzer IV (Sd.Kfz.161) formed the mainstay of German panzer divisions, and it holds the distinction of being the only German tank to remain in production throughout the course of WWII. This tank, numerically the most common with 8500 produced, underwent a series of improvements to improve its armament and armor protection. The Ausf. F1 was manufactured from April 1941 to March 1942. Armed with a short-barreled 75mm KwK37 L/24 gun, a total of more than 450 were produced, although a number were later converted to F2 status. Other unique distinguishing features were a new turret design (with thicker armor, and two-piece side doors), plus new drive sprockets and idler wheels to accommodate wider 400mm tracks.

Dragon's new model accurately reflects all these key personality traits, and indeed, the model is completely new except for the road wheels! It has benefited tremendously from technical know-how and research conducted in creating its 1/35 scale brothers. Dragon is thus justifiably proud of this new Panzer IV kit, which is undoubtedly the best available on the market in terms of accuracy, detail and proportions. For those small-scale modelers interested in early Panzers, this kit will be an instant hit!