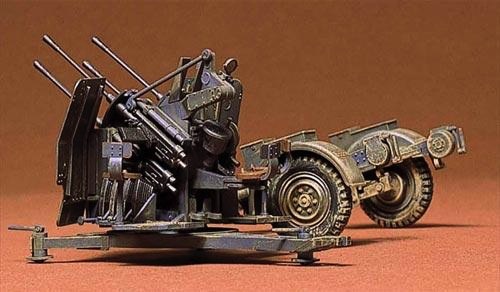 The 2 cm Flakvierling 38 was one of the most successful and widely used of all German antiaircraft guns developed from the 2 cm Flak 30 and 2 cm Flak 38 which were single 2 cm mounts. In 1940 an enlarged version of the single 2 cm Flak 38, featuring four 2 cm guns in a common mount, was designed and put into production. It came into wide service from 1941 onwards and remained an important item of field equipment throughout the war. An anti-aircraft company was two or three platoons each of three 2 cm Flakvierling 38 plus a further platoon equipped with the 3.7cm Flak 36 or 43. On the 2cm Flakvierling 38, the four gun barrels were air-cooled and were of monobloc type. They were on a common central pylon mount, elecated by handwheel and gearing. A second handwheel rotated the turntable. The gunlayer was seated centrally at the rear of the mounting and controlled both handwheels. A gyro computer type sight was linked to the elevating gear, the layer turning the two handwheels to keep the spot on the target. Later a visual ring and bead sight replace the computer sight. The guns could be fired either automatically or semi-automatically by foot pedals operated by the layer. Each pedal fired two diametrically opposite guns. Loading numbers were seated each side of the mount to replace magazines from racks on the turntable. Each metal magazine held 20 rounds. Four types of HE round and two types of AP round (including tracer) were used with gun.