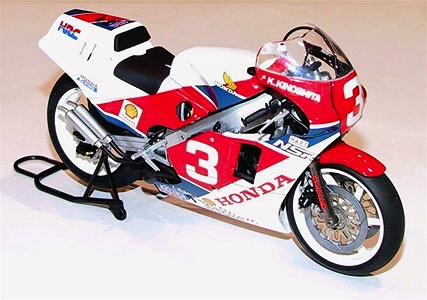 Features: Although now featuring 990cc 4-stroke engine bikes, prior to 2002 the top class of the World Motorcycle Grand Prix was the GP500, featuring bikes restricted to 500cc engines capable of producing a maximum 150hp. In the 1980's Honda and Yamaha dominated the GP500, with Honda racing their legendary NSR 500. Honda's 2-stroke V4 engine loaded NSR 500 made her first appearance in the GP500 in 1984. After a disappointing debut season the NSR 500 lived up to all expectations in 1985, with former world champion Freddie Spencer taking out his second world title. In 1986, whilst the NSR 500 was in the capable hands of Wayne Gardner in the GP500 class, in Japan it flew the famous Honda racing team colors in the domestic All Japan Road Race Championship. Burdening high expectations for instant success, by round 3 champion Honda rider Keiji Kinoshita and the NSR 500 had already formed a formidable combination. Drawing out the full potential of the powerful 2-stroke 499cc V4 engine, the Kinoshita-NSR 500 combination clock d the fastest time in qualifying to go on and win Honda's first race of the season. Taking out a second consecutive win in round 4, Kinoshita had already climbed to the top in the riders championship. Holding the lead for the rest of the season, Kinoshita took out his first title in 5 years and Honda their first ever domestic title in the 500cc class. Improving with every season, the legendary NSR 500 continued to be used at the top racing level until the arrival of the revolutionary 4-stroke 990cc RC211 V in 2002.