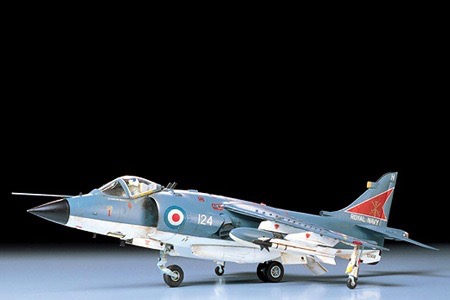 About the Hawker Sea Harrier
The Hawker Siddeley Harrier astounded the world with its unique ability to take-off and land vertically utilizing vectored thrust from its powerful 8000kg thrust engine. First tested in concept in 1960, the aircraft went through many periods of testing and modification prior to acceptance by the Royal Air Force and other nations in 1974. The production Harriers utilized either a Pegasus 6 or 11 engine of 8000 or 9750kg thrust and it was only natural that the Royal Navy should find application for this type of aircraft with their fleet air arm. Various political and financial considerations delayed the order for the "Navalized" Harrier until May 1975, when the Admiralty ordered an initial 24 aircraft plus one T.Mk.4's in 1980.

The FRS.1 is easily distinguished from its land based counterparts by a modified nose section incorporating a raised pilots seat and Ferranti Blue Fox radar, plus principal armament of Sea Eagle anti-ship missiles and AIM-9L Sidewinder air-to-air missiles. Martel or Harpoon ASMs may be carried as alternatives to Sea Eagle until the latter become operational. The first FRS.1 to fly was actually the initial production Sea Harrier, on 20 August 1978, and the prototype model later in December 1978. The home of the Sea Harriers was designated Yeovilton Navy Base, and they received the first aircraft in June 1979, where intensive flight trials began with '100/VL' squadron four days later.

This IFTU unit was designated 700A squadron in September 1979 and was re-designated 899 Squadron in March 1980. Three "Through - Deck" cruisers had been ordered for Sea Harrier operations: Invincible; Illustrious and Ark Royal, the first of which was commissioned in July 1980. All three vessels are to be fitted with a "Ski-jump" to assist take-off with full load, and this installation was also added to the commando carrier HMS Hermes when it was allotted a Sea Harrier squadron. A small export order for Sea Harriers was placed by India in November 1979 for six FRS.51's and two T.60 trainers.

The Sea Harrier, along with the GR3 Harriers from the RAF, were put to actual combat tests during the recent Falkland Islands crisis. The British South Atlantic force was built up with the addition of GR3 and FRS.1 Harriers bringing the total jump jet strength to around 40 aircraft carriers Hermes and Invincible. The Sea Harrier (FRS.1) has about 30% more re-action control for easier landings, and better 'over the nose' visibility; however, the GR3's from the RAF worked well in the overall operations during the conflict and both aircraft distinguished themselves to the utmost. The Royal Navy Harriers, during the conflict, were painted in the new "toned down" finish of matte sea blue overall, while the RAF aircraft were in the extra dark sea gray scheme. With a cruise speed of mach .9 and a top speed of 1.25, and landing speed of 0, this is truly a versatile combat aircraft and one that will be in weapons inventories for many years to come.