Kommandeurwagen Steyr Type 1500A
Tamiya Models and Paints
Less than $30.40 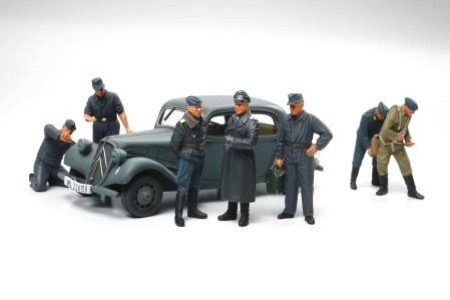 Backordered (Sign up for an email
notification when it's
back in stock!)List price: $37.00
You pay less than: $29.60
Add to cart to see actual sales price.

Nothing like the addition of a few figures to bring a model display to life! This limited edition set features the Citroen Traction 11CV Staff Car paired with several Luftwaffe crew figures to enable a realistic diorama straight from the box.

About the Citroen Traction 11CV
With its front wheel drive monocoque frame design, the Citroen Traction 11CV was a groundbreaking design when it was first introduced. Its low center of gravity and torsion bar suspension system gave it excellent performance and its graceful body styling distinguished it from other cars of that period. They were widely used by the French military, and therefore large numbers of them were commandeered by German forces after France was defeated. They were used on all fronts as staff cars for both high-level officers and Luftwaffe pilots. The car's production even continued after the end of the war, lasting until 1957.