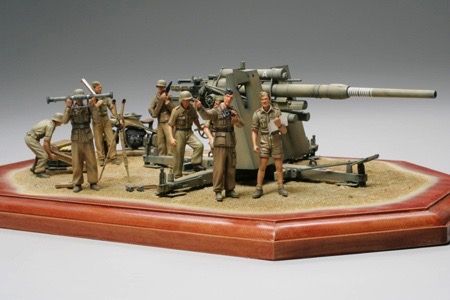 DISCONTINUED This product has been discontinued
and is no longer available.List price: $49.00
You pay: $33.39
(All prices in U.S. Dollars)

The 88mm Flak 36 Gun was powerful enough to penetrate the armor of Allied tanks such as the Matilda, leading to its effective use as an anti-tank weapon in North Africa. Tamiya's legendary flagship 1/35 scale model returns with newly designed figures in tropical Africa Corps uniforms. This kit is great for building dioramas involving Rommel's men in the North African campaign.

About the German 88mm Gun Flak 36
Flak 36 anti-aircraft guns made their notorious debut in an anti-tank role at Halfaya during the Battle of Sollum (Operation Battleaxe), June 1941. Firing from concealed positions at short range, they destroyed 123 out of 238 attacking British tanks. The Germans claimed one British tank for every 20 "88" rounds fired at Halfaya. Flak 36 guns serving in Africa performed in both anti-armor and anti-air roles, and were indeed the ace-in-the-hole of the Africa Corps.