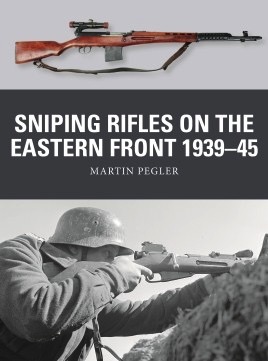 Manufacturer: Osprey Books
Stock Number: OSP WPN67
View all products of type "Arms and Equipment"
The Soviet Union had developed a significant sniping force by 1939, but the extraordinary skill and cunning displayed by Finnish snipers during the Winter War forced the Soviets to innovate. On the other side, German sniping suffered from a lack of standardization of weapons and a lack of marksmen deployed at the start of the Great Patriotic War (1941-45). There were few heroes in the conflict, but on both sides, the snipers were idolized - especially on the Soviet side, gaining almost mythical status.

As well as traditional bolt-action weapons, both sides used several types of semi-automatic rifle, such as the SVT-38 and the Gew 41. Offering greater firepower at the expense of long-range accuracy, such weapons would be profoundly influential in the postwar world. Fully illustrated, this absorbing study investigates the development of sniping weapons and techniques on World War II's Eastern Front.