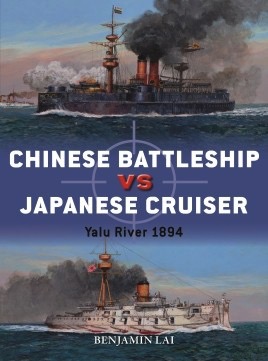 Manufacturer: Osprey Books
Stock Number: OSP DUE92
View all products of type "Naval Warfare"
The 1894-95 war between China and Japan, known in the West as the First Sino-Japanese War, lasted only nine months, but its impact resonates today.

The Chinese Beiyang (Northern) Fleet was led by her flagship, Dingyuan, and her sister ship, Zhenyuan, which were the biggest in Asia; German-built armoured turret ships, they were armed with four 12in guns and two 6in guns, plus six smaller guns and three torpedo tubes. For their part the Japanese fleet, including the Matsushima and her sister ships Itsukushima and Hashidate, were each armed with a single 12.6in Canet gun and 11 or 12 4.7in guns, plus smaller guns and four torpedo tubes. The scene was set for a bloody confrontation that would stun the world and transform the relationship between China and Japan.

Fully illustrated with stunning artwork, this is the engrossing story of the Yalu River campaign, where Chinese and Japanese ironclads fought for control of Korea.