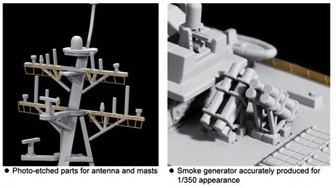 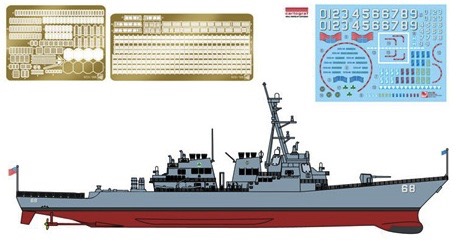 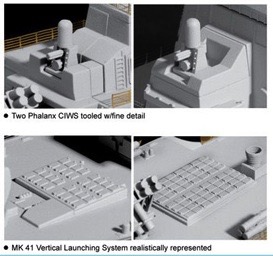 Dragon's latest 1/350 scale plastic ship kit is a fine rendering of the U.S.S. The Sullivans (DDG-68), an Arleigh Burke-class guided missile destroyer. This particular class of vessel is famous for being an air warfare destroyer equipped with the advanced Aegis defense system with AN/SPY-1D radar. The U.S.S. The Sullivans has a rather unusual name, but one that is rich in heritage. In November 1942, the U.S.S. Juneau was sunk by a Japanese submarine near Guadalcanal. There were five brothers aboard the ship - George, Francis, Joseph, Madison and Albert Sullivan. The name of this modern destroyer commemorates the tragic deaths of these five brothers, the largest loss of life in any one family in WWII. DDG-68 was commissioned on 19 April 1997.

This ship kit is replete with fine detail, and incorporates a one-piece hull. This aids accuracy and makes assembly that much more convenient. Details like the various weapon systems are nicely represented, and there is a generous assortment of photo-etched parts. These metal parts include deck railings and various items for the antennas and mast. Dragon has come up with an excellent 1/350 scale ship kit of the U.S.S. The Sullivans, a ship whose motto is "We stick together." The same could well be said of this well-engineered plastic model!