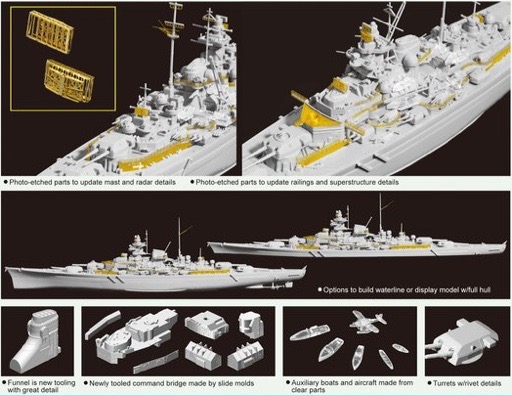 The Tirpitz was the second largest battleship ever built in Europe, although perhaps it didn't achieve the same fame as its sister ship, the Bismarck. Named after Admiral Alfred von Tirpitz, this battleship that was commissioned in 1941 never actually fired its guns against an enemy vessel. Dragon has released an impressive 1/700 scale Premium Edition kit of the Tirpitz. The dramatic box art portrays this mighty battleship participating in Operation Sizilien, the German raid on Spitsbergen, Norway, in September 1943. The Tirpitz and Scharnhorst bombarded Allied defenders on the island as a battalion of German troops landed in a temporary occupation. In fact, this was the only time in her career that the Tirpitz fired her guns in anger. After this operation the battleship moved south to Tromso where it lurked in German bases.

At this time the Tirpitz was dubbed the 'Lonely Queen of the North' until it was sunk by Tallboy bombs dropped from Lancaster bombers on November 12, 1944. Even though this kit is based on a hot earlier release, it has received a plethora of improvements. For instance, it has benefited from a completely new command bridge and funnel to replace the vinyl items in the previous kit. Some parts are slide molded, while a generous selection of photo-etched parts such as masts, radars and railings add finesse. Modelers have the choice of building a waterline or full-hull version of this mighty German warship. This tiptop Premium Edition Tirpitz kit will look breathtaking in any ship collection.