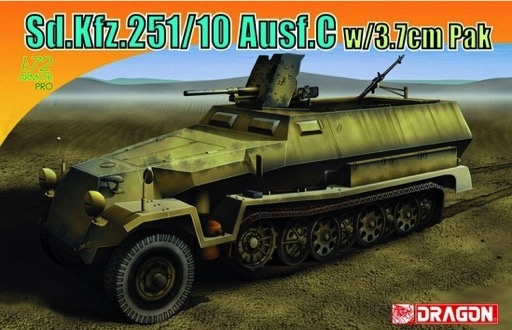 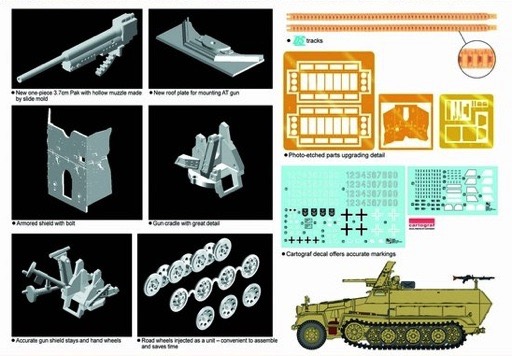 The Sd. Kfz. 251 halftrack was a highly successful design, with a bewildering array of variants produced during WWII. The 251/10, for example, was a halftrack equipped with a 3.7cm PaK 36 antitank gun. This small-caliber weapon designed by Rheinmetall first appeared in 1936, but by the time WWII broke out it was outdated and ineffective against more heavily armored enemy tanks. Thus, a number of these "door knockers" (as the gun was sometimes nicknamed by German troops) were mounted on the hull superstructure of some German halftracks to provide light and mobile anti-armor support.

Features:
Dragon will release a new 1/72 scale model of an Sd.Kfz. 251/10 with such a weapon. The 3.7cm PaK is a completely new tooling produced specifically for this kit. Detail on this gun is delicate and well rendered. The vehicle itself is based on the hugely popular range of Dragon 1/72 halftrack kits, so its fine pedigree promises the utmost accuracy and ease of assembly. To accurately reproduce the 251/10 variant, all necessary changes to the fighting compartment were incorporated. This model actually depicts an Ausf. C model, which was the earlier hull made from a complex series of armor plates. With this fine kit, modelers can add some extra firepower to their collections.