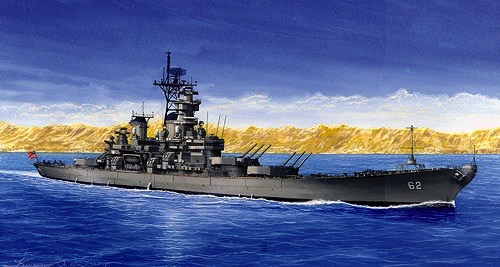 Available(Ships in 2-4 business days)
This product is in stock
at our suppliers, if ordered it
will take a few days to arrive.List price: $50.00
You pay less than: $40.00
Add to cart to see actual sales price.

Following the release of the 1/700 scale BB-63 Missouri in July of 2004, Tamiya introduces their second U.S. battleship to the Waterline Series, the BB-62 New Jersey.

About the BB-62 New Jersey
Serving from 1943 to 1991, the BB-62 New Jersey is the most decorated battleship in U.S. Naval history. Launched in 1942, the New Jersey was one of 4 Iowa class battleships built by the U.S. Like other Iowa class ships she boasted a 45,000 ton displacement, an amazing 212,000hp, was packed with three turrets of 50 caliber 40.6cm triple guns, and despite her large size, with hull stretching over 270m, was designed narrow enough to pass through the Panama Canal. Following serving in major battles in the Pacific during WWII, she was then deployed to both the Korean and Vietnam War. In 1982, she was upgraded with modern technology and weapon's systems enabling her to launch Tomahawk cruise missiles and Harpoon anti-ship missiles. Whilst serving on missions in Central America, she was rushed to the Mediterranean in 1983 to provide fire support in Beirut, Lebanon. After serving in the Gulf War, she was decommissioned for the last time in 1991.