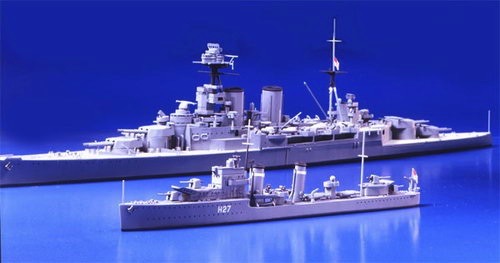 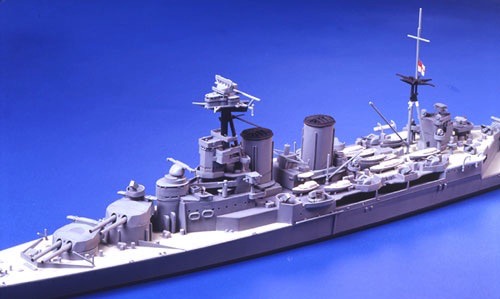 Tamiya re-releases Hood to our 1/700 Waterline Series. Along with the high-quality finish of the original model, this kit includes an all-new E Class Destroyer which accompanied Hood during its pursuit and final showdown with Bismarck in the Denmark Strait.

About British Battle Cruiser Hood and E Class Destroyer
Built in May 1920, Hood remained one of the world's largest warships for nearly 20 years, although by the outbreak of WWII she was relatively outdated in terms of naval technology. On May 23rd, 1941, Hood set out as part of a naval force to hunt down Bismarck and Prinz Eugen, which were heading toward the Atlantic to assault Allied shipping. On the morning of the 24th, Hood spotted and engaged the German ships in fierce combat. The more modern Bismarck outmatched Hood, sinking it with hits from its huge main guns. Along with the demoralizing loss of its symbolic flagship, the British navy also suffered the loss of 1,415 men, including Admiral Holland and his talented officer corps. A total of 9 E Class Destroyers were built in 1934-35, featuring 1,350 ton displacement, 100m length and top speed of 36 knots. They were armed with 4 main guns, 8 AA guns, 8 torpedo launchers and 20 depth charges. 2 E Class ships, Echo and Electra, escorted Hood on her final mission, both surviving that assignment. Electra had the grim distinction of rescuing Hood's only 3 survivors.