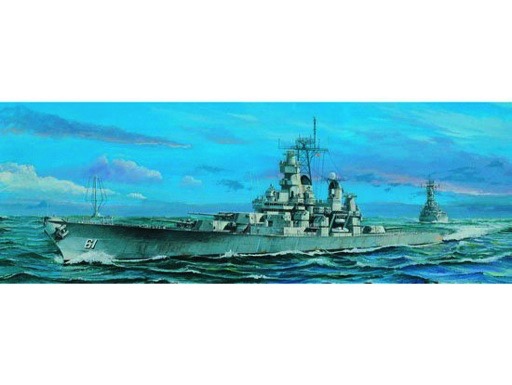 BB-62 New Jersey was laid down in the Philadelphia Navy Yard on 16 September 1940, as the second ship of Iowa class battleships. The Iowa class was planned with a view to rival the super battleships (Yamato class-to-be) planned by Japan, which withdrew from Washington and London treaty in 1936. Its design represented that the class was 45,000 tons (the very limit to the London Treaty), nine 16in/50cal guns in three batteries, and speed 33 knots. The speed was decided under precautions against the Japanese Knots class battleships, which boasted of speed 30 knots. To fulfill the conditions, its engine compartment for a high-power engine needed to be large on however, the width of US warships was limited to 33m. Because the US faced two oceans and its ships had to pass through the Panama Canal. Inevitably, the waterline of the Iowa class was as long as 262m. Although the US navy at that time had the know-how of 18in guns, they could not be mounted on a ship under 33m-wide. And the fact that the Yamato class had 18in guns was not known to the US until the end of the WW. New Jersey entered service on 23 May 1943 and experienced several battles in the Pacific Ocean with Iowa. The next 1944 she became the flagship of the 3rd fleet with Adm. Halsey on board. On 30 August 1944 she left the Pearl Harbor to participate in Battle of Leyte Gulf. Then she and Iowa were expected to confront with Adm. Kurita's fleet with Yamato and Musashi. It was, however, not realized because of Adm. Ozawa's decoy operation and Kurita's mysterious U-turn. In 1945 New Jersey participated in Battle of Okinawa as the flagship of the 7th Battleship Squadron and supported landing attack. Opposingly the Japanese Navy ordered 10 warships including Yamato to Okinawa. On the way Yamato was sunk by aerial attacks by US aircraft carriers. The duel of the battleships between Japan and the US was forever unrealized. After the war the Iowa class ships except the 3rd Missouri were in mothballs. In 1950 the Korean War occurred and brought New Jersey back to the battlefield. New Jersey supported the landing attacks to Wonsan in May 1951. In 1968 New Jersey alone entered service the Vietnam War and made gunfires on several coasts in Vietnam until March 1969. In December she accomplished her task. The Iowa class ships were believed to end their lift as the last battleships. In 1980 Reagan administration ordered the revival of Iowa class ships under the project of beefing up the US naval force. New Jersey was the first to be modernized and entered service in December 1982 with Harpoon, Tomahawk, and Cutting-edge electric devices. In July 1983 she participated in the blockade mission in Nicaragua. Subsequently she bombarded the positions of Syria. Finally Iowa class ships were formally deleted From the Navy list as the US cut down the expenses on national defense under the end of the Cold War. New Jersey is now preserved as a memorial ship in Bayonne, N.J.