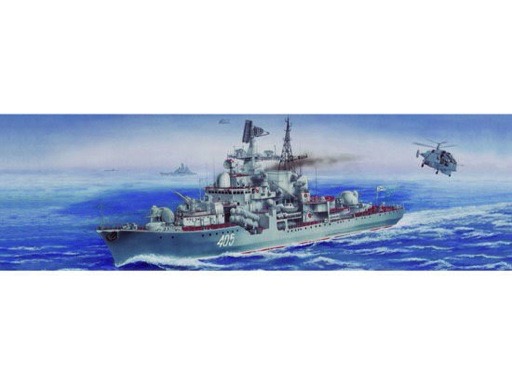 DISCONTINUED This product has been discontinued
and is no longer available.List price: $104.95
You pay: $74.19
(All prices in U.S. Dollars)

The Sovremenny Class destroyer is a former soviet designed comprehensive surface warship with a maximum displacement of 8480 tons, similar in size to the US Navy's Aegis class missile cruiser. Although this ship is seen as too big for agile modern naval warfare, its awesome combat system including 8 Moskit 3M80E missiles, NATO designated as SS-N-22 Sunburn in particular, is still the most effective deterrent weapon found on any modern naval vessel. This is the reason why the ship is also described as an 'aircraft carrier killer'. The first of its class Sovremenny was initially built in 1977 and then subsequently commissioned in 1980, with a total of eighteen warships built for the former Soviet Navy. Finally, the latest two are further modified vessels ordered by China and were delivered in 1999 and 2000.