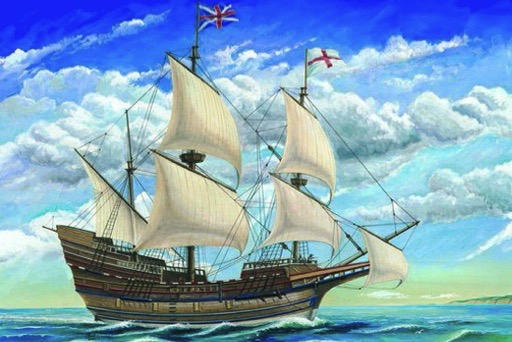 The Mayflower was built in 1609 and was owned by Christopher Nichols, Richard Child, Thomas Sort, and Christopher Jones. The ship weighed about 180 tons, and its home port was in Harwich, England. In its early years it was used for the transportation of tar, lumber, and fish and likely for whaling off the coast of Greenland. In 1620,Thomas Weston, assisted by John Carver and Robert Cushman, hired the Mayflower and the Speedwell to undertake a voyage to begin a colony in Northern Virginia. The Speedwell was determined to be unseaworthy, and therefore did not make the famous voyage with the Mayflower. Christopher Jones was the captain of the Mayflower when it took the Pilgrims to New England in 1620. They anchored off the tip of Cape Cod on November 11, 1620. The Mayflower remained in America that winter, and both the crew and the Pilgrims suffered the effects of the first winter, with almost half dying. The Mayflower set sail for the trip back to England on April 5, 1621, arriving in Harwich on May 6th. The ship made trading runs to Spain, Ireland and lastly to France before remaining dormant in port for about 2 years. At that time it was appraised for probate, which is the last record of the Mayflower. It has been assumed that the Mayflower was broken apart and sold for scrap.