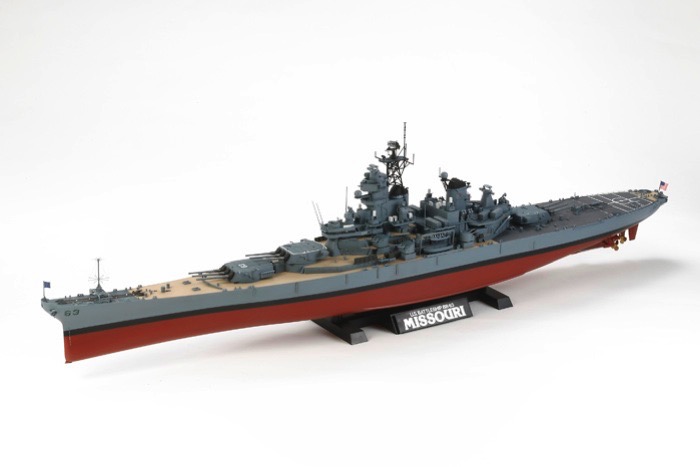 The USS Missouri (BB-63) was the third ship of the Iowa-class and was commissioned in 1944. During the Pacific War, she supported attacks on Kyushu and Okinawa and then participated in actions such as the bombardment of Muroran in Hokkaido. It is a well-known fact that the signing ceremony of Japan's surrender documents took place on the Missouri's decks on September 3, 1945. Following the end of the Korean War, the Missouri was mothballed at the reserve fleet anchorage but was refitted with, various, modern equipment to rejoin the U.S. Navy in 1986. Following Iraq's invasion of Kuwait, the Missouri and her sister ship Wisconsin were deployed to the Middle East and she helped conduct the first firing of Tomahawk cruise missiles in combat during the opening stages of the Gulf War. The Tamiya model kit faithfully depicts the Missouri as she appeared in 1991. New parts have been tooled to update the kit.