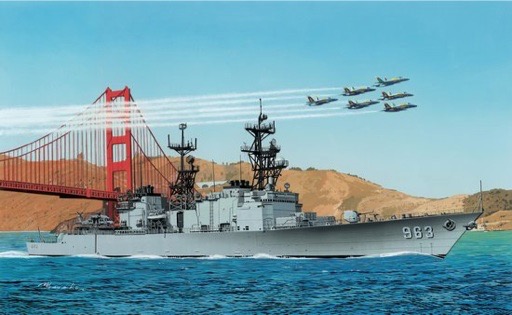 DISCONTINUED This product has been discontinued
and is no longer available.List price: $33.95
You pay: $23.29
(All prices in U.S. Dollars)

The USS Spruance (DD-963), named after Admiral Raymond Spruance, was the lead ship of the Spruance-class of destroyers. This class of vessel was designed as an anti-submarine warfare destroyer, and they were the first U.S. Navy ships to be powered by gas turbines. DD-963 was commissioned on 20 September 1975 and it had a displacement of 8040 tons. The USS Spruance ranged far and wide, and some of its many duties included observing the Iran-Iraq War, a maritime blockade of Iraq, a UN mission in Haiti, and hurricane relief in Florida. The USS Spruance was decommissioned in 2005, before being sunk as a target for air-launched Harpoon missiles in December 2006.

Dragon has previously released a 1/700 scale kit of the USS Spruance class, but the kit has now been completely overhauled and refitted. After intensive work, it has been relaunched as a Premium Edition kit. This means all the accuracy and detail of the original kit has been retained, while new photo-etched parts to replicate the deck railings, radars, masts and etc. Dragon's engineers have been careful to ensure the kit remains convenient to assemble, all the time maximizing the amount of detail on offer to discerning modelers. This enhanced Premium Edition kit is ready again to commence any mission assigned to it by modelers!