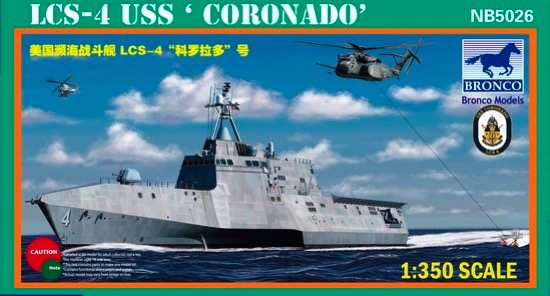 The USS Coronado is the second Independence Class littoral combat ship to be built by General Dynamics and Bath Iron Works. A contract for the ship was awarded in May 2009 and the ship should be completed by October 2012. It is expected that the ship will be identical to the USS Independence, an all-aluminum tri-maran designed for high speed operations in inshore waters. Payloads can be designed to suit the mission as much of the hull is of modular construction so can be quickly reconfigured to suit requirements. Main missions include mine laying/sweeping, anti-submarine warfare and anti-surface ship warfare. The ships are relatively small with a full load displacement of only 2,750 tons, compared to 10,000 tons for an Arleigh Burke class destroyer.