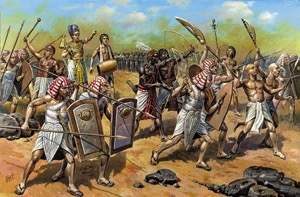 A set of Egyptian warriors of the Old Kingdom period represented by spearmen, archers and light infantrymen. The army of "Kemet" (the ancient Egyptians gave their country this name) guarded the boarders of the greatest Ancient Empire against nomadic people and bellicose neighbours-Hattians and Assyrians.