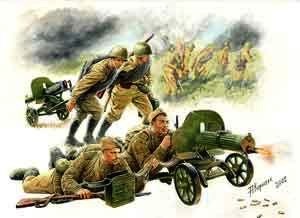 This new kits features two of the most common Soviet Machine Guns of WWII (Maxim mod. 1930 and 1941 with ammunition box) and a crew of 4 soldiers from the early stages of WWII.

The Maxim gun was the first self-acting machine gun.

Whilst its predecessors, such as the Gatling and Gardner guns had a manual crank to power the mechanism for loading, firing and ejecting their cartridges, the Maxim gun used energy from its ammunition.

By World War I, many armies had moved on to improved machine guns. The British Vickers machine gun was an improved and redesigned Maxim (Vickers and Maxim having joined forces) introduced into the British Army in 1912 and remained in service until 1968. The German Army's Maschinengewehr 08 and the Russian Pulemyot Maxima were both more or less direct copies of the Maxim. On the Western Front, 90 percent of bullet related casualties were inflicted by Maxim-type guns.