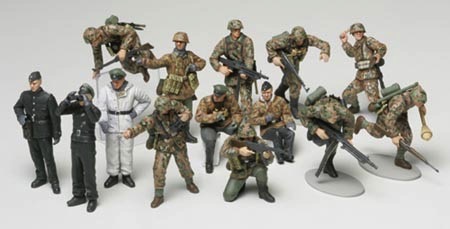 German Figures Set Part 2
Adding a 3rd figure set to our popular 1/48 MM Series, this selection features Late WWII German Panzer Grenadiers together with tank crewmen and a driver and officer figure specially designed for displaying with 1/48 scale light vehicles such as the Schwimmwagen.

About the Uniforms
The German army in WWII is known for employing a wide variety of advanced and creative camouflage uniforms. One example is the reversible camouflage smock which featured a spring pattern on one side, and fall pattern on the other. The M44 fatigues issued from spring 1944 featured pea pattern camouflage of green, grey, brown and black spots on a neutral background. German troops such as Panzer grenadiers used this uniform, together with a variety of camouflage smocks, in the latter part of the war. Armored crews initially wore black fatigues, but began using camouflage uniforms from the middle of the war. While some units favored black leather jackets, the hooded combat jacket issued in 1942 was used widely until the closing days of WWII.