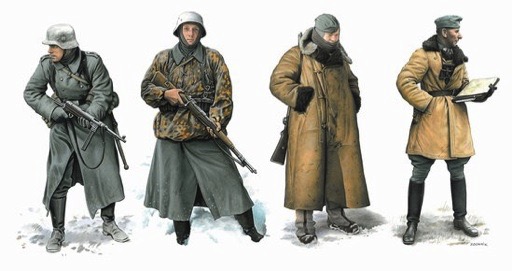 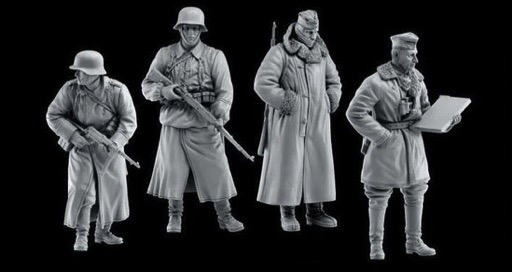 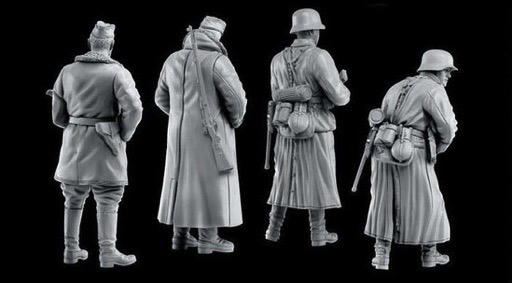 Germany launched its massive invasion of the Soviet Union in June 1941, with the aim of destroying the country's military, political apparatus and capturing its territory. The attack met with early success, and Axis forces advanced deep into Russia. Operation Typhoon was Germany's strategic offensive to capture the capital Moscow, Russia's political center. The operation consisted of two pincers north and south of Moscow by panzer groups, as well as a large force moving west directly against the city. However, German forces, confronted by stretched supply lines, the debilitating onset of winter and stiffening resistance, finally stalled on Moscow's outskirts. This bitter fighting took place between October 1941 and January 1942 before Soviet counteroffensives turned the tide. The fighting around Moscow incurred some one million casualties, and it represented the first German retreat from which it would never recover.

Dragon's newest 1/35 scale figure set portrays German soldiers from Operation Typhoon. The figures are bundled up against the freezing cold winter weather that made conditions even more hazardous. Typical of the period, and Germany's ill-preparedness for winter warfare, the four soldiers are wearing a wide range of clothing. A general has a sheepskin coat on, attire that's rarely produced in 1/35 scale. The poses are extremely vivid, and one can almost feel the cold seeping through their clothing and the snow flurries blowing against them. These well-sculpted figures could be used individually in a vignette, or grouped together in a winter scene. This was the first severe winter that German troops encountered, and this set perfectly conveys the grueling nature of the ultimately unsuccessful Operation Typhoon.