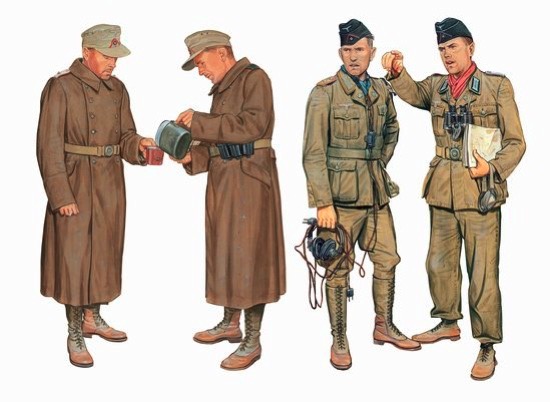 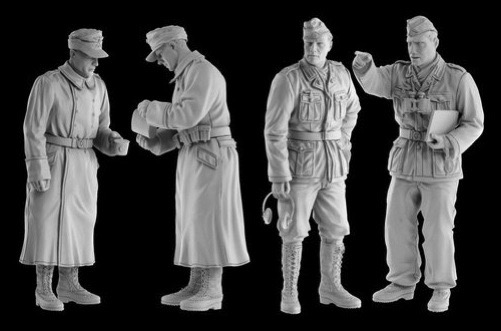 DISCONTINUED This product has been discontinued
and is no longer available.List price: $22.95
You pay: $15.99
(All prices in U.S. Dollars)

During WWII, the North African Campaign saw Allied and Axis momentum swing backwards and forwards across the desert sands of Libya, Tunisia and Egypt. After the heavy defeat of Italian troops, Germany dispatched its newly formed Deutsches Afrikakorps (DAK) to push back Allied forces in Operation Sonnenblume ("Sunflower"). The first expeditionary DAK troops arrived in Libya in February-March 1941, and they were quickly marshaled and sent into action by the legendary General Erwin Rommel. By mid-April he had successfully pushed the British out of Libya, except for the besieged enclave of Tobruk. In 1941, Rommel's first offensive continued to push Allied units all the way back to the Egyptian border. Dragon's latest 1/35 scale figure set features four DAK soldiers from this early period of the Desert War. The set is broken down into two groupings - one pair of figures represents panzer crewmen while the remaining duo is part of an artillery crew. Modelers will immediately recognize the utility of this collection. The tankers in summer clothing can be matched with any of the DAK tanks in Dragon's range (the Panzer III Ausf.H, for example), while the artillery crew would be a perfect match for Dragon's 15cm s.FH.18 howitzer. The four 1/35 German soldiers are sharply molded and their uniforms and personal equipment are accurately depicted. Notably, the artillerymen are warmly wrapped up in greatcoats for the chilly Libyan nights. As part of a desert diorama or vignette, these versatile DAK figures from Dragon are the ideal accessory.