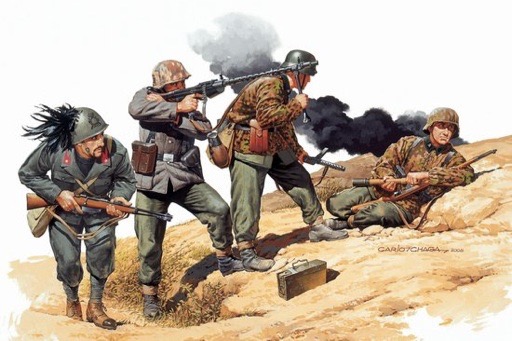 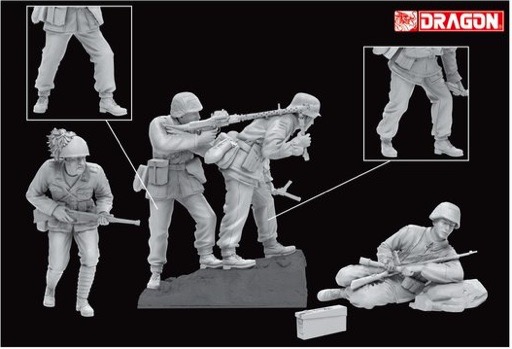 Yugoslavia was invaded on April 6, 1941, and formal resistance barely lasted ten days. However, the German-led occupation proved particularly harsh, which contributed to a large-scale partisan campaign to fight against the Axis occupiers. Resistance was organized mainly by the communists under the leadership of Tito. What started as a guerilla war in the first three years evolved into more conventional warfare from the second half of 1944 onwards. By the war's end, Tito's Partisans numbered 800,000 and were organized into four field armies. The Partisans were a constant threat to occupying forces, and fighting was vicious as Axis troops attempted to neutralize this threat in a series of offensives.

Dragon's latest 1/35 scale figure set is a novel one featuring Axis soldiers fighting Yugoslav Partisans. In the box there are three German soldiers from Prinz Eugen, a mountain division that spent the war campaigning against guerillas in the Balkans. The fourth soldier is an Italian, meaning this set offers tremendous versatility to modelers. Each figure is vividly sculpted in combat poses, and they display an assortment of uniforms and weapons. The centerpiece of the set is a machinegun team shooting from a makeshift firing point. Of interest is that the machinegun team members are provided with two sets of legs! This means they can be posed on either sloped or flat terrain. A 'plastic rock' that the prone soldier is leaning on is also contained in the set. True to reality, the German soldiers carry a variety of weapons as this ad hoc formation does battle in the mountainous terrain of Yugoslavia some time in 1943. With its German-Italian combination, this valuable set allows figure modelers to depict a theater of WWII that doesn't receive the attention it merits.