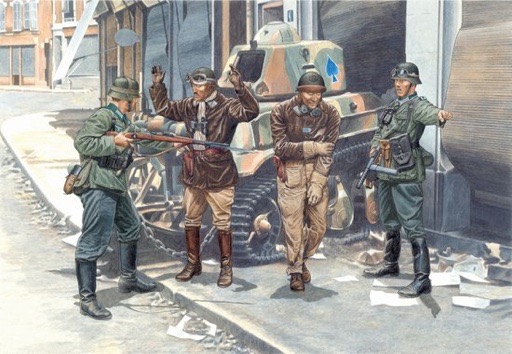 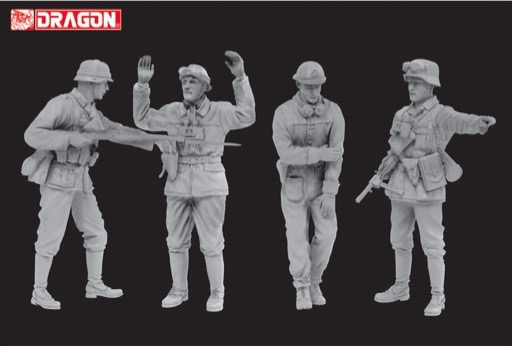 Germany began executing its carefully thought out blitzkrieg strategy on France and the Low Countries on May 10, 1940. The sudden attack shattered the nervous calm of the Phony War, and it met with immediate success. In Fall Rot (Case Red) of the campaign, German forces outflanked the Maginot Line, and within a matter of days Paris had fallen and French forces had capitulated en masse. Even though the Allies had a clear numerical advantage in artillery and tanks, the Germans were able to produce a spectacular victory thanks to superior tactics.

Dragon's newest 1/35 scale set of figures commemorates a scene commonly played out during the French campaign. The set depicts two Wehrmacht infantrymen capturing two bewildered French tank crewmen in the time period of June 1940. The pair of surrendering Frenchmen is dressed in typical tank crew uniforms and headgear of the period, while the two German soldiers sport early-war uniforms and weapons such as an MP-28 sub-machinegun. Each of these figures is extremely well sculpted, and they capture the essence of respective victory or defeat. The set portrays a unique yet common scene that will have numerous applications for figure and tank modelers. Indeed, the set tells a vivid story of Germany's seemingly undefeatable blitzkrieg strategy as German forces steamrolled over French resistance.