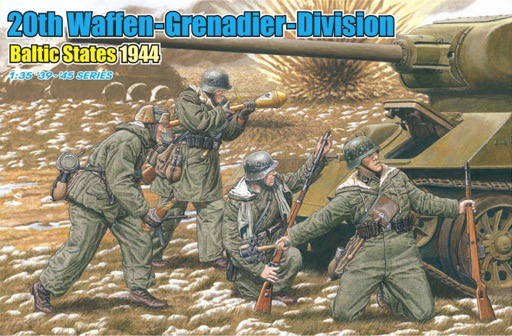 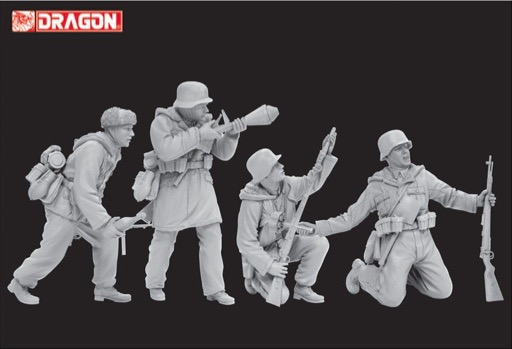 The 20th Waffen Grenadier Division, consisting mostly of forced draftees from Estonia, was formed in the spring of 1944. This division took part in German efforts to halt the Baltic Offensive initiated by the Red Army in September-November of 1944. This massive Soviet effort penetrated through to the Baltic Sea and succeeded in permanently splitting the land connection between the German Army Group Center and Army Group North. As well as expelling German forces from Estonia and Lithuania, the rolling series of offensives trapped a large number of German troops in Latvia.

Recognizing that Army Group North had been permanently cut off, it was renamed Army Group Courland. The Red Army progressively reduced this Courland Pocket in Latvia, and 200,000 remaining German soldiers were captured there at the end of the war. The Baltic Offensive resulted in a total of 260,000 casualties from both sides.

Dragon's newest 1/35 figure set depicts four soldiers from the 20th Waffen Grenadier Division fighting in this fierce campaign. Reflecting the desperate battle of survival as they defend their Estonian homeland against hordes of infantry and T-34 tanks, these soldiers wield a range of weapons such as a Kar98 with grenade launcher, Panzerfaust, MP-40, G41(W) semi-automatic rifle, Geballte Ladung concentrated charge (grenade bundle) and even a Molotov cocktail. To protect against the onset of the Baltic winter, these conscripts are wearing heavy parkas. The poses are vivid and novel, and they capture the desperate nature of the fighting. Whether in muddy trenches or amidst wrecked T-34 tanks, these figures will fit well in a variety of wintry late-war scenarios.