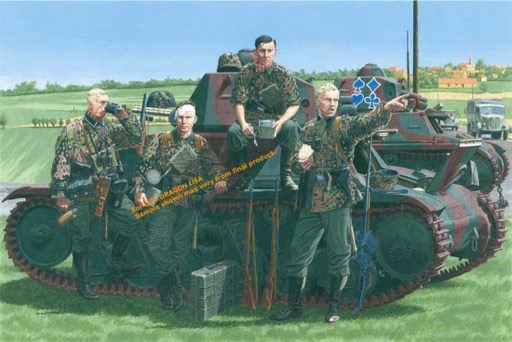 DISCONTINUED This product has been discontinued
and is no longer available.List price: $21.95
You pay: $15.39
(All prices in U.S. Dollars)

This release shows four German figures from Das Reich as they would typically have appeared in the French campaign. They are supplied with a comprehensive and detailed set of personal equipment and personal weapons (including the Kar98k, MP40 submachine gun, Panzerbachse 39 antitank rifle). They come in very casual poses as they enjoy a bite to eat or a welcome drink after a long march, or perhaps they are relaxing after an intense firefight. A particularly unique feature of these figures is the camouflage smocks they are wearing, for such apparel wasn't widespread at this stage of the war.

About the 'Das Reich' Division:
One of the most famous German divisions of WWII was Das Reich, composed of some of the best-trained and battle-hardened troops the nation could provide. Its famous symbol was the wolf's hook (or Wolfsangel) rune. First combat for the division was the Western campaign in 1940. Das Reich was involved in the drive towards the Dutch city of Rotterdam, before subsequently transferring to France and attacking towards the French capital. By the end of this Blitzkrieg campaign, the Das Reich Division had advanced as far as the Spanish border.