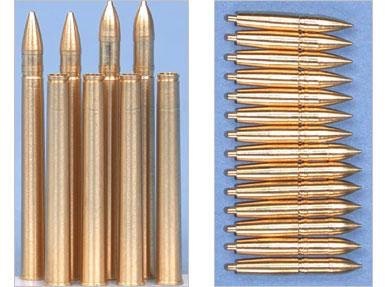 DISCONTINUED This product has been discontinued
and is no longer available.List price: $14.50
You pay: $9.99
(All prices in U.S. Dollars)

About the Marder III M 7.5cm Projectiles
When Germany invaded France, they discovered that their 37mm anti-tank gun was useless against heavy enemy armor. Thus, orders were given for an upgrade to a more powerful 50mm on the German Army's main anti-tank weapon, the Marder. When Germany invaded Russia in 1941, they encountered and were rendered nearly helpless by unexpectedly powerful enemies. The names of two of these enemies were the T34 and KV tanks. To counter these tanks, the German Army upgraded the 50mm anti-tank gun to a 75mm gun (the Pak40/L46 7.5cm Anti-tank gun) and mounted it on a Czechoslovakian 38t chassis to make the gun capable of independent movement. This self-propelled gun employing a 75mm anti-tank weapon entered mass-production in 1943 as the Marder III. With a crew of 4, a standard payload of 27 rounds, and 20mm thick armor protecting the turret, the Marder III would become Germany's main anti-tank weapon until the appearance of the Jagdpanzer 38t Hetzer tank destroyer. 942 Marder III M self-propelled artillery units were produced in all by the end of the war.