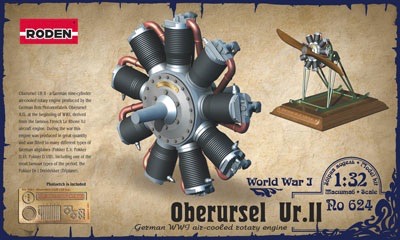 The German firm Motorenfabrik Oberursel A.G., which specialized in producing automobiles and railway locomotives, began designing aircraft engines on the eve of WWI for the aviation industry which was developing quickly at the beginning of the Twentieth Century.

In 1908 the company bought a license to produce the French Gnome engine, and five years later for another famous French engine, the Le Rhone 9C. Once the conflict had begun, the orders from the military for aviation engines mushroomed and by 1915 Motorenfabrik Oberursel A.G. was making a variety of types of rotary engine.

The most successful of them was the Oberursel UR II, which was really a copy of the French Le Rhone 9J. Taking into consideration that the principal German water-cooled engine the Mercedes D III was being produced in insufficient quantity, the Motorenfabrik Oberursel's engine production was essential for the military, especially when that specific engine was the most successful of all rotary engines. The most famous airplane of the Great War, the Fokker Dr.I, had this very engine; and it was with no small thanks to the UR.II that the Dr.I displayed a dogfighting ability to match the airplanes of the enemy.

In 1917 Germany's military leadership expressed their intention to change the aviation scene completely, for airplanes solely with water-cooled engines. This was in no small part connected with the reliable operation of 'temperamental' rotary engines, which required only castor oil; there was a constant lack of it, and mineral substitutes affected the smooth running of the engine highly adversely.

The appearance of the superlative Fokker D.VII with its water-cooled engine seemed to have ended the history of rotary engined planes in WWI (especially after the unsuccessful development of Motorenfabrik Oberursel's next project, the UR.III engine). However, during the final months of the war Antony Fokker proved one more time, that a well designed plane, even powered by such a veteran engine for that period of time as the Oberursel UR II, could play an important role in air combat. His Fokker E.V monoplane was sent to military units when Germany had already lost any last chance of breaking the course of the war, however desperately they resisted the air armada of the Entente countries, and it was equipped with this self-same Oberursel UR.II engine.