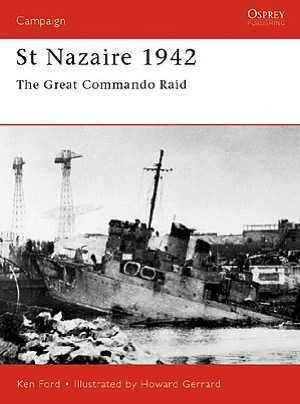 Manufacturer: Osprey Books
Stock Number: OSP CAM92
View all products of type "Battles"
View all products of type "Naval Warfare"
About this book
The raid on the port of St Nazaire in March 1942 by a sea-borne task force from British Combined Operations remains one of the most daring actions of World War II. The port lies at the mouth of the River Loire and in 1942, as well as a U-Boat base, contained the massive 'Normandie' dock, the only facility on the Atlantic coast large enough to accommodate the German pocket battleship Tirpitz. This book tells the story of the raid on St Nazaire that denied the use of the dock to the Tirpitz, the sister ship of the Bismarck, and constituted a crucial victory in the Battle of the Atlantic.