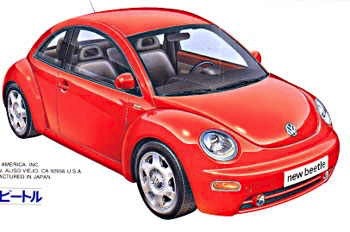 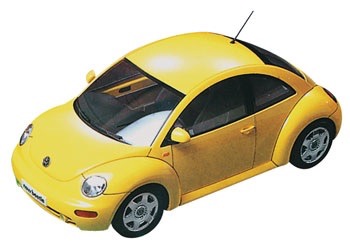 DISCONTINUED This product has been discontinued
and is no longer available.List price: $33.00
You pay: $22.59
(All prices in U.S. Dollars)

The car's features included a cute, rounded style exterior; adequate power supplied by a horizontal, air-cooled, 4-cylinder engine and a simple, practical interior. In America, the Beetle appeared in various roles from racing to custom cars. This new model, recently revealed to the public, was the topic of much attention, and eventually became the familiar icon it is today. The New Beetle is based on its popular predecessor, and retains some of the familiar characteristics. Exterior features include the rear fender, hood, roof, circular headlights, rounded taillight lenses and the overall curved motif. The interior features include an assist grip located above the passenger seat glove compartment, B pillar with safety strap and the nostalgic dashboard flower vase. The New Beetle embraced the style and feel of the vintage Beetle and infused it with modern technology to make it a safe and reliable vehicle.

New items include a dual air-bag added for safety, a 2 liter 4 cylinder 115 HP gasoline engine or a 1.9 liter diesel turbo 90 HP engine, both mounted in the front. Mcpherson struts are used for the front suspension, and torsion beam coils are used in the rear. These features and the new design make the New Beetle stylish and easy to drive, and it will be a worldwide hit.