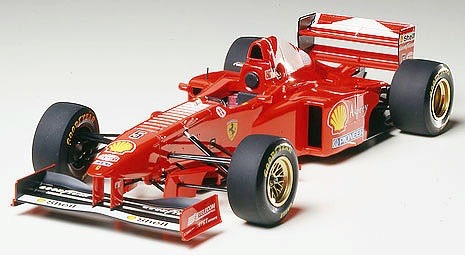 DISCONTINUED This product has been discontinued
and is no longer available.List price: $41.00
You pay: $27.99
(All prices in U.S. Dollars)

Team Ferrari, of automotive racing fame, was founded by Enzo Ferrari, and made their Grand Prix racing debut in 1948. Since then, they have established a reputation for creating advanced racing machines that often became benchmarks for Grand Prix racing. The team entered the 1997 Formula One Championship season with their highly sophisticated, F301B racing machine. Although the Ferrari F310B has appelative resemblance to the F310 car raced by the team during the 1996 season, it has been modified very substantially. Directed by talented designer John Barnard, the monocoque construction was totally renewed and the aerodynamic package was redesigned through extensive wind tunnel testing to obtain the best stability with raised nose design. To ensure reliability, the transversely mounted gearbox and the rear suspension used on the F310 was retained. The V-10 cylinder 2,998.1cm cubed powerplant, called 046/2, was an evolution of last year's engine, 046/1. While maintaining reliability, the driveability and performance was improved and it was said to yield ten horsepower more than the previous version. The front and rear suspension used independent push-rod activated torsion springs to obtain optimum handling at the track. With talented drivers Michael Schumacher and Eddie Irvine at the wheel, the Ferrari F310B fully displayed its outstanding performance to the world's Ferrari fans throughout the season.