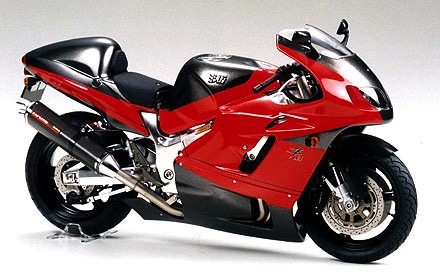 Backordered (Sign up for an email
notification when it's
back in stock!)List price: $44.00
You pay less than: $35.20
Add to cart to see actual sales price.

Ever since the special parts supplier, Yoshimura took their debut victory in the 1978 Daytona 100-mile Race with their Suzuki GS1000 equipped with a revolutionary exhaust system, the name Yoshimura has become famous around the globe as a factory team. Over 20-years later, in 1999, a racing machine version of the Suzuki Habusa 1300 (GSX1300R), developed by Yoshimura using unique state-or-the-art technology, was entered in the Formula X class. Yoshimura's machine took the victory. The following year, the machine took a double victory in the S-NK class of the Suzuka 8hours World Endurance Championship Race, taking 6th place overall. The Yoshimura Hayabusa was born on the racetrack, but soon was released on the open market as a race replica. The Yoshimura version of the Hayabusa featured totally original cowling, and a unique Tri-Oval muffler, giving it a different appearance from the standard Hayabusa. Only 100 Yoshimura versions of the Hayabusa were released on the open market.