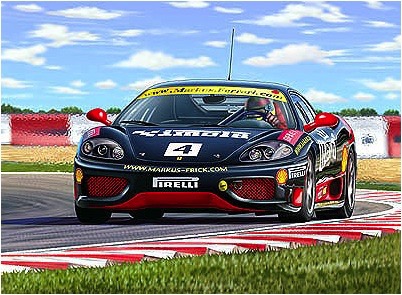 DISCONTINUED This product has been discontinued
and is no longer available.List price: $32.50
You pay: $24.99
(All prices in U.S. Dollars)

The Ferrari Challenge racing series was inaugurated in 1993. In 1999 Michael Schumacher introduced the new Ferrari 360 Modena Challenge which would run in the Challenge from 2000. The customer racing sports series offers modern motor sport at the highest level and brings together Ferrari pilots from 10 different European countries. Norbert Graf has participated in the Ferrari Challenge since 1996. Born in Mulheim, he can look back on a long motor sports career. Since the middle of the eighties he has gained a great deal of experience in long distance races with the BMW M3 with which he had appropriate successes. From 1993 onwards he took part in the FIA-GT championships. In 2001 this building contractor won the European title in the Ferrari Challenge class for experienced drivers, the Pirelli trophy. In 2003, racing for the Saggio team from Wurzburg, he took second place in the German championship and in the Pirelli trophy he scored 135 points in the overall standings.