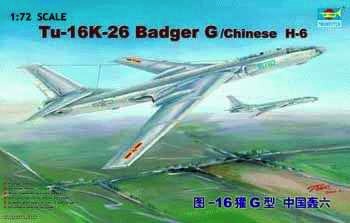 The Tu-16 became the first Soviet mass production Heavy jet bomber. It was developed by Tupolev design bureau in the very beginning of the 50's. There were 1500 planes built in total. While being in Soviet service this planes took part in Afghanistan war. In the Russia the last Tu-16s were removed from service in 1994. This aircraft were also exported to Egypt, Indonesia , Iraqi, China.