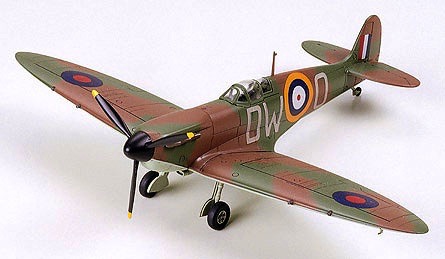 About the Supermarine Spitfire Mk.I
The Supermarine Spitfire is regarded by many as the most esthetically designed single seat fighter to appear during the Second World War. It was conceived by the brilliant British designer Reginald J. Mitchell, and first flew on 5 March 1936. It was an advanced, low wing single seat monoplane with a very smooth flush riveted metal skin and a long flowing front cowling. Using the famous RollsRoyce "Merlin' liquid cooled 12 cylinder engine that produced more than 1,000 horsepower, the Mk I Spitfire attained a top speed of 586km/h. The very distinctive elliptical shaped wing was useful in reducing parasitic drag and allowed a fairly thin wing construction. It carried a large coolant radiator under the starboard wing, and a small oil cooler under the port wing, giving it an asymmetrical appearance when viewed from the front and bottom. The retractable main landing gear also contributed to its smooth lines, and gave it higher performance. The Mk I Spitfire was armed with eight 7.7mm machine guns, four to each wing. The early production of Mk I Spitfires used a fixed pitch wooden two blade propeller, which was later replaced with a two-pitch wooden two blade propeller. The Spitfire's combat action in thwarting Germany's attempt to raid the English mainland during 1940, and known as the "Battle of Britain" has ensured this fighter's pride of place in the minds of England's men and women forever.