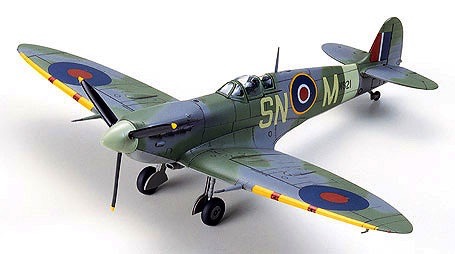 Backordered (Sign up for an email
notification when it's
back in stock!)List price: $22.50
You pay less than: $18.00
Add to cart to see actual sales price.

About the Supermarine Spitfire Mk.Vb/Mk.Vb Trop.
The mass production of the Spitfire started in 1936 and more than 20000 planes were produced until 1948. Among several variations of this main fighter of Royal Air Force, the Mk.V series was the most widely produced and more than 6500 planes were deployed. By early 1941, the majority of fighter squadrons were furnished with Spitfire Mk.I. Improvements were suggested by the pilots and every effort was made to maintain its performance advantages over its opponents. The main improvement was the use of the more powerful Merlin type 45 engine and a version with a mixed armament of four 7.7mm machine guns and two 20mm cannon was named "Mk.Vb". Some Mk.Vb's has slipped wing tips for better low altitude maneuverability. In 1942, the Spitfire was also urgently required for operations overseas. One of the better known versions was the North African prepared Spitfire designated "TROP.", for Tropical. To protect engine from sand, a Vokes air filter was affixed over the carburetor intake. Although the filter was successful, its large mass reduced the aircraft's speed. The problem was solved by 103rd maintenance unit stationed at Aboukir, who designed a smaller more streamlined unit that was equally effective. The spitfire went through numerous minor and major changes throughout its production life, and served with distinction on every battle front of the war.