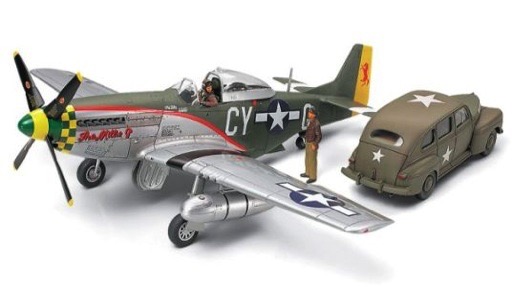 Tamiya's 1/48 scale North American P-51 Mustang is widely considered by aviation model enthusiasts as the most accurate and well-engineered scale model kit of this aircraft. This criticallyacclaimed aircaft kit has now been packaged together with a new 1/48 scale Military Miniature Staff Car to add another element to the model's display possibilities.

About the Staff Car
When the U.S. formally entered WWII in 1941, its automobile industry was called upon by President Roosevelt to become the "Arsenal of Democracy." Detroit responded by halting new car development and changing its assembly lines to churn out tanks, planes, and other war equipment. The 4-door sedan selected for use as a military staff car was the last new car model available until the end of hostilities in 1945. It featured distinctive "suicide" rear doors, V8 engine, and had a fuel-fired heater in the passenger compartment.