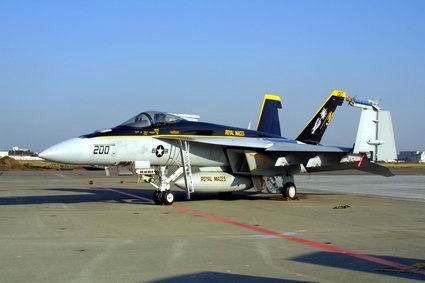 This kit includes a new single seat cockpit and canopy parts for the type E.

Markings: About the F/A-18E Super Hornet:
The newest model, the single seat E Super Hornet, carries over the name and design concept of the original F/A-18, but is extensively redesigned, with a new, 30% larger airframe. The Super Hornet has a stretched fuselage and larger wings, leading-edge extensions, and horizontal tails; the GE F414 engines are a more powerful development of the F/A-18's F404; the avionics suite is upgraded but broadly similar. The E began when McDonnell Douglas proposed an enlarged Hornet to replace the cancelled A-12 project. (The ambitious and very expensive A-12 design was to have been a stealthy replacement for the US Navy A-6 and US Air Force attack aircraft.) Congress was unwilling to fund a "new" aircraft, however the proposed F/A-18E could be represented as a mere upgrade, and a $3.8 billion development contract was signed in December 1992. The first of the new aircraft was rolled out at McDonnell Douglas September 17, 1995.