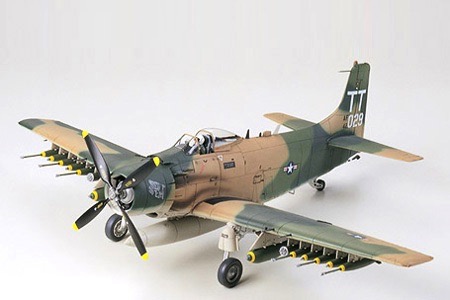 About the Douglas A-1J Skyraider U.S. Air Force
Also going by the names Dauntless II, AD, A-1 Able Dog, and Spad, the Douglas Skyraider saw almost 30 years of service. The Skyraider's development started in June 1944. Not completed in time for WWII, its first combat came with the outbreak of the Korean War in June 1950. The first production version to roll out of the Douglas factory was designated the AD-1. Twelve years and seven versions later, over 3200 Skyraiders had been produced.

Among those, the AD-6 version, also known as "Able Dog Six", was produced in the greatest numbers. The next and final version of the Skyraider, the AD-7, was extremely identical to the AD-6, but it had reinforced wing spars and wing fittings, as well as the strongest landing gear of all the variants. The AD-7 housed the new wright R-3350-26WB engine, which enabled a top speed of 285 knots. Due to a directive to standardize the designation of Navy and Air Force aircraft, AD-6 and AD-7 became known as A-1H and A-1J respectively.

In 1965, when U.S. air operations in Vietnam became more aggressive, literally hundreds of Skyraiders, including the A-1J, were deployed to the 14th and 56th Special Operations Wings (SOW). Armed with Mk.82 and Mk.117 bombs, 20mm wing-mounted cannons, and rocket launchers, the Skyraiders were used in a wide variety of combat missions.