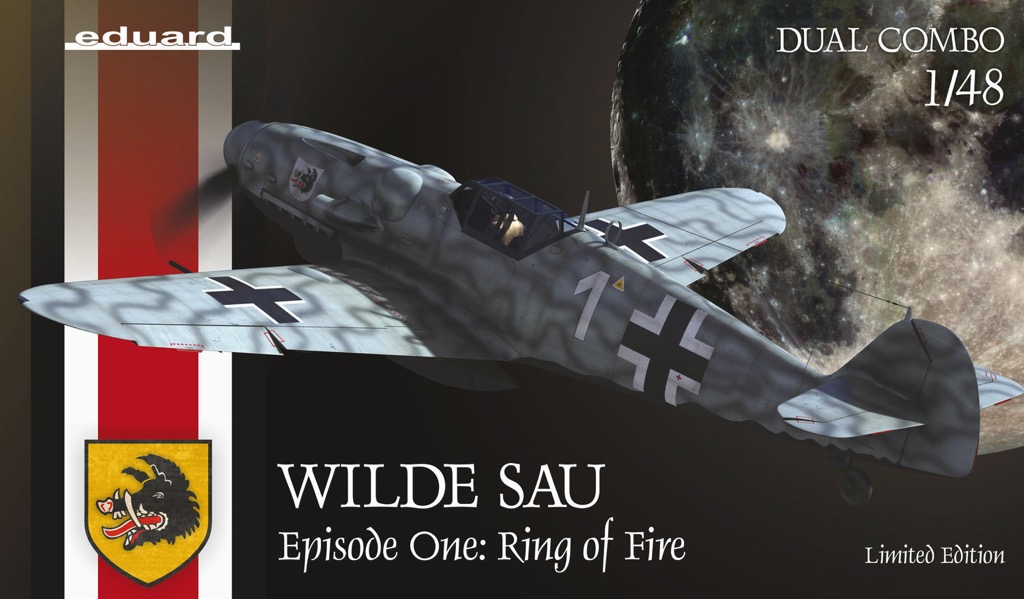 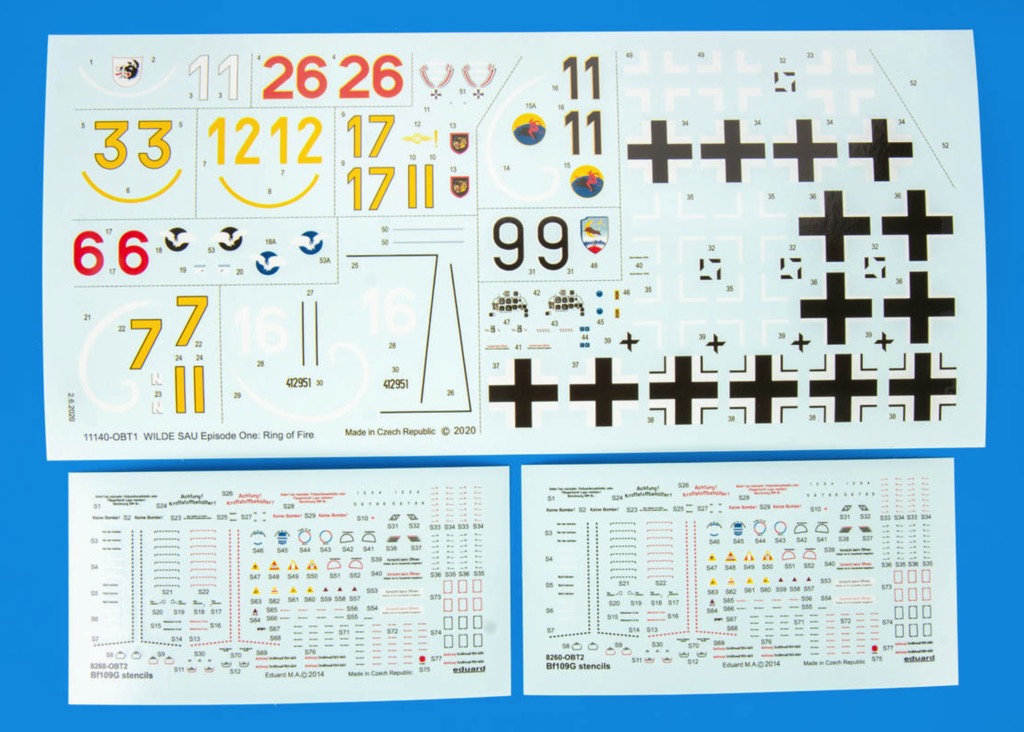 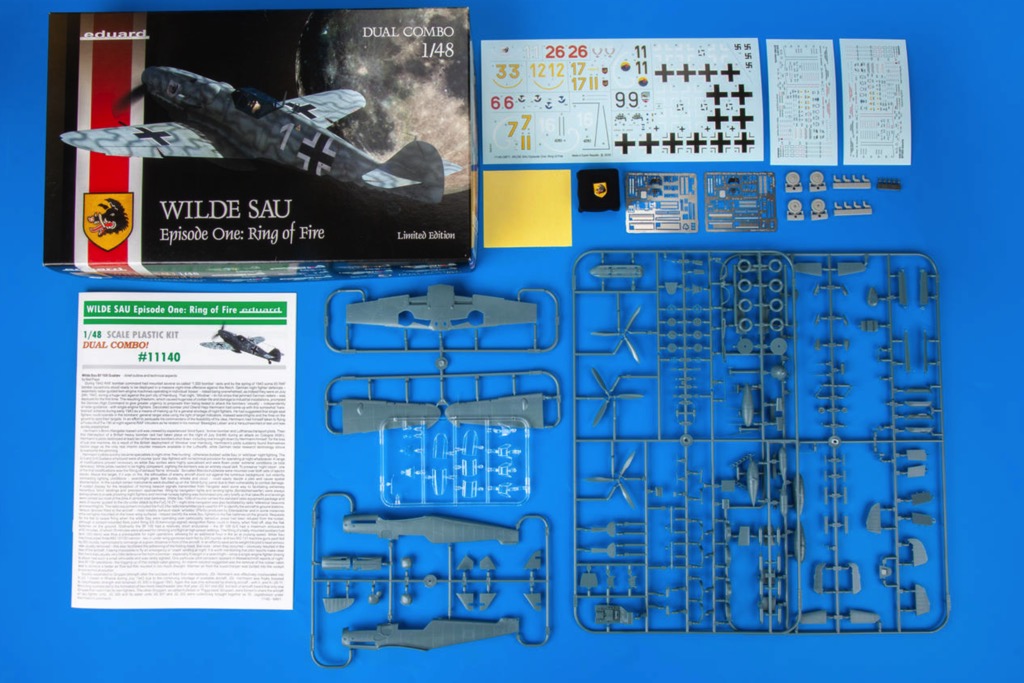 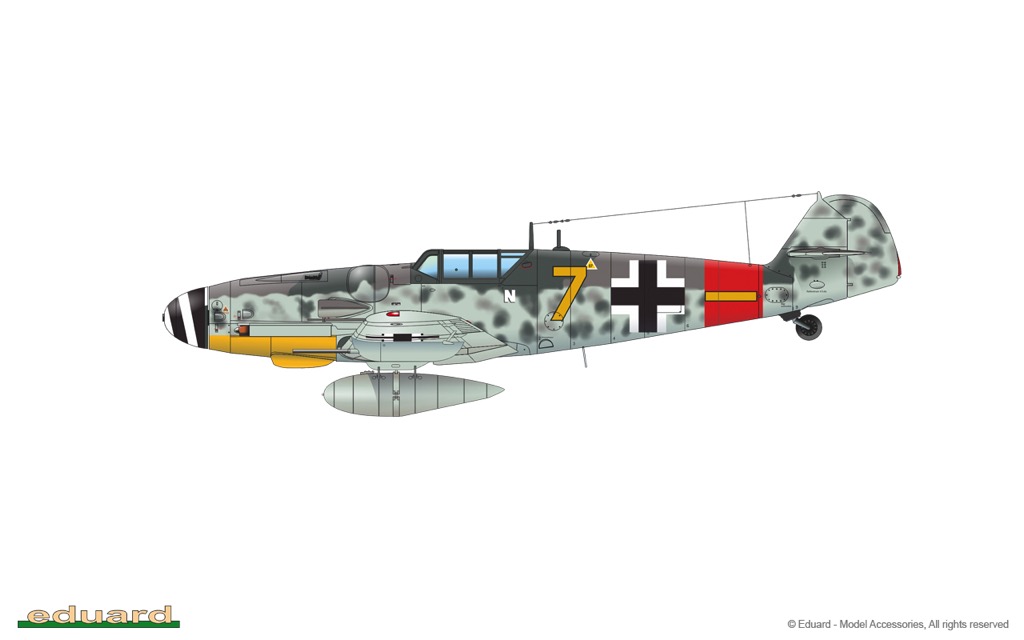 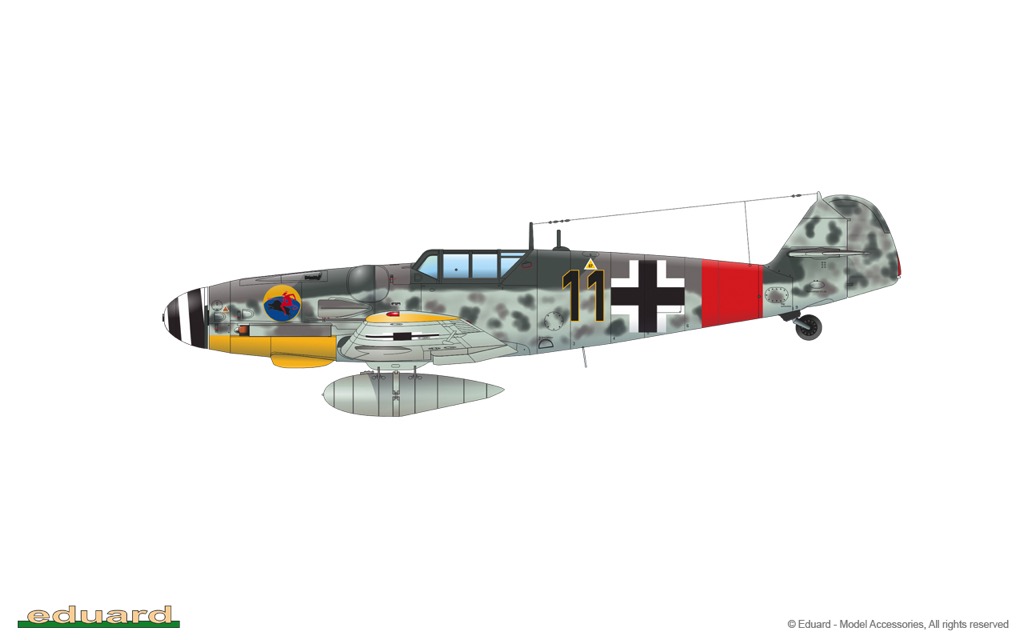 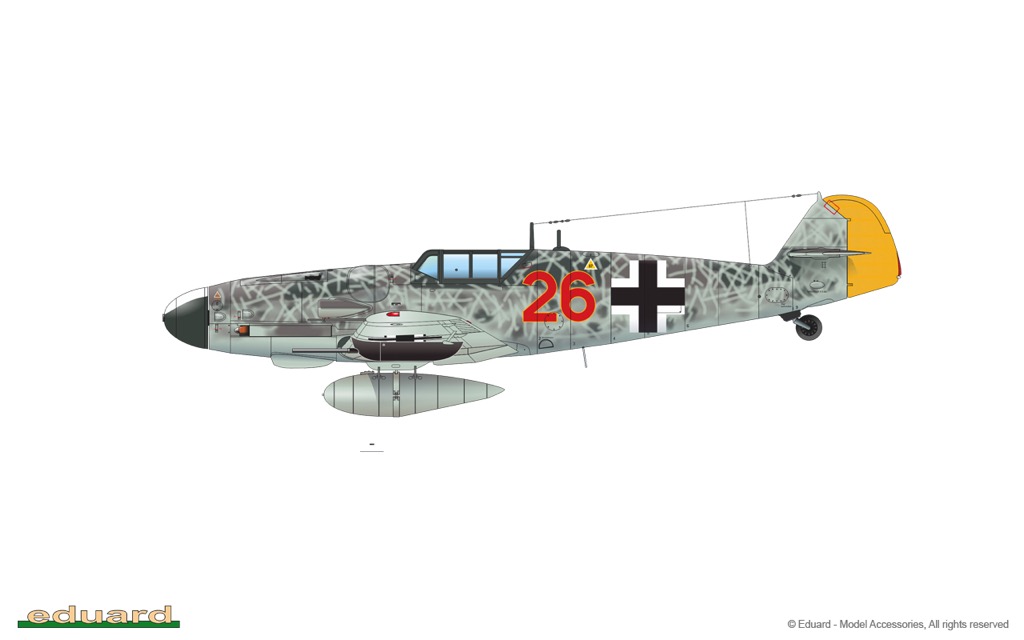 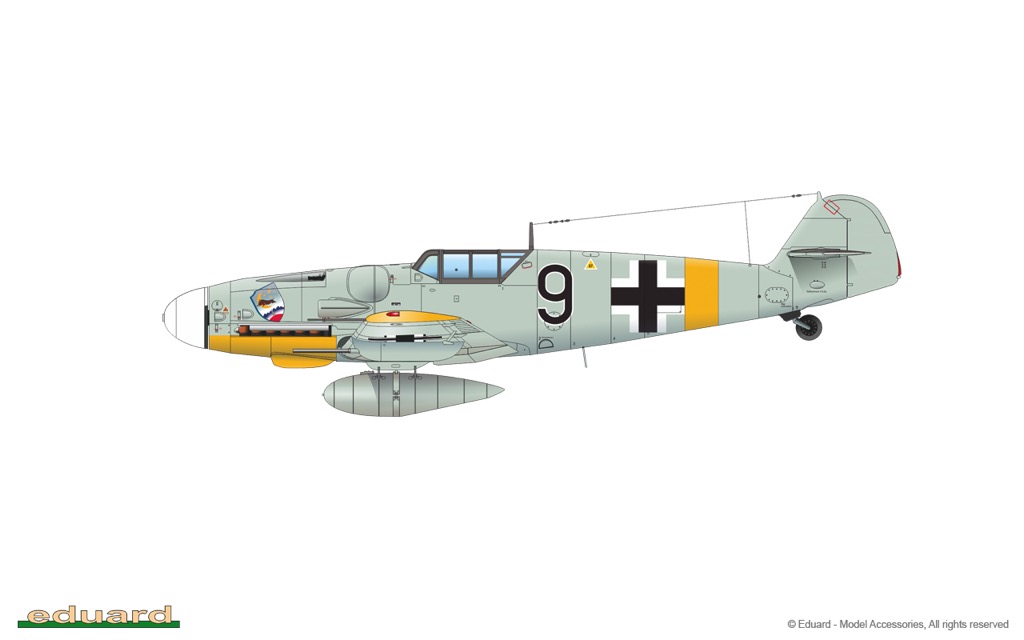 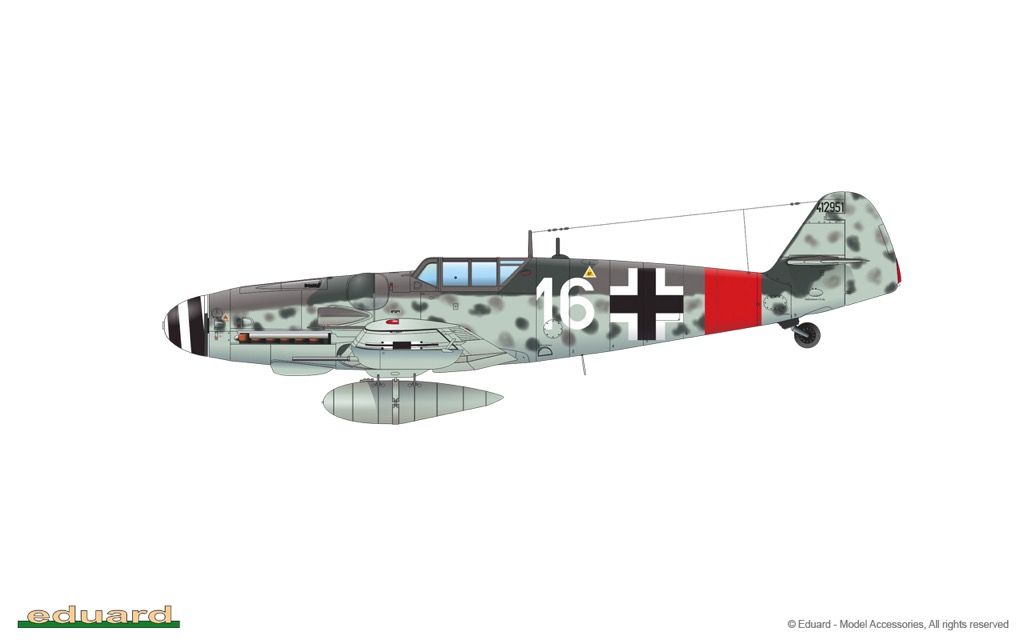 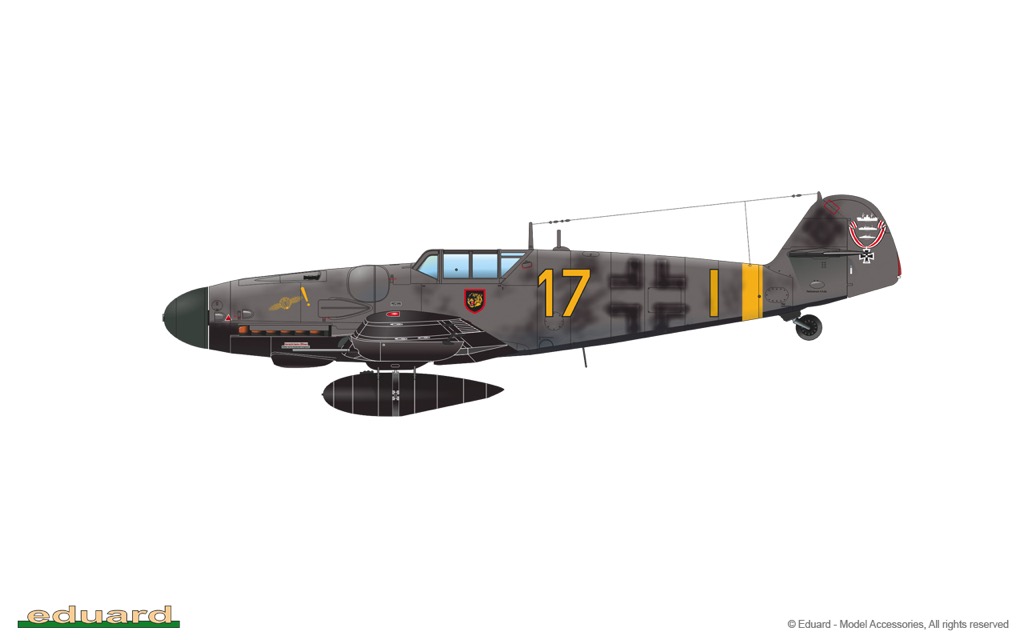 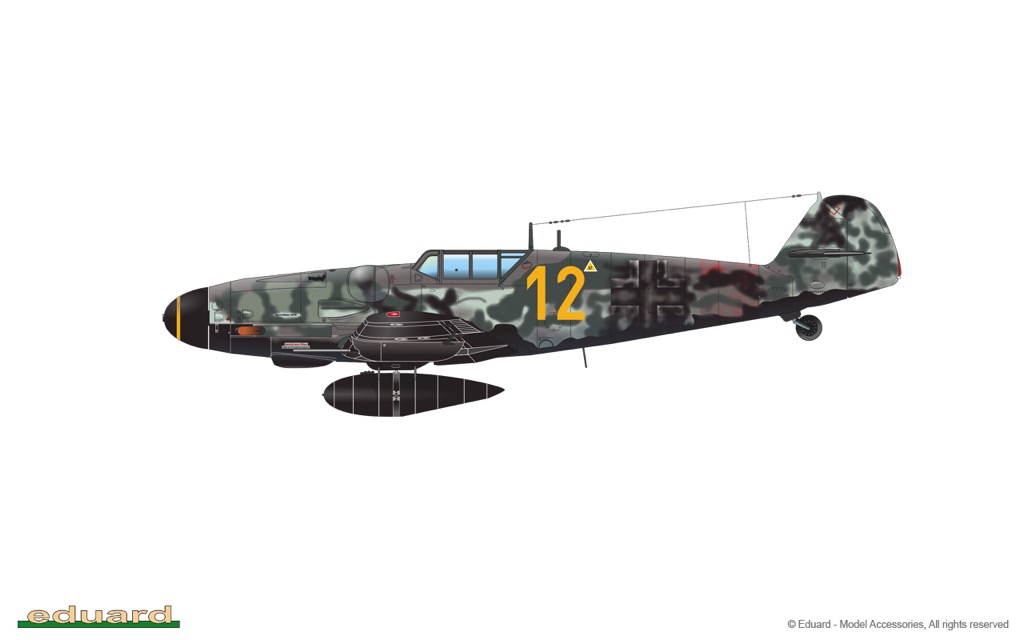 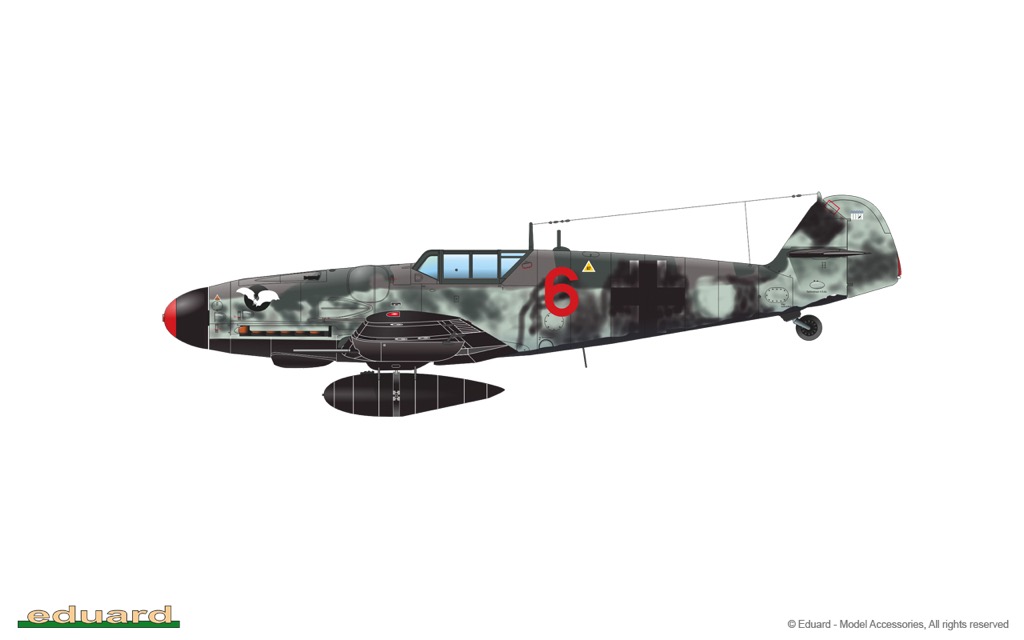 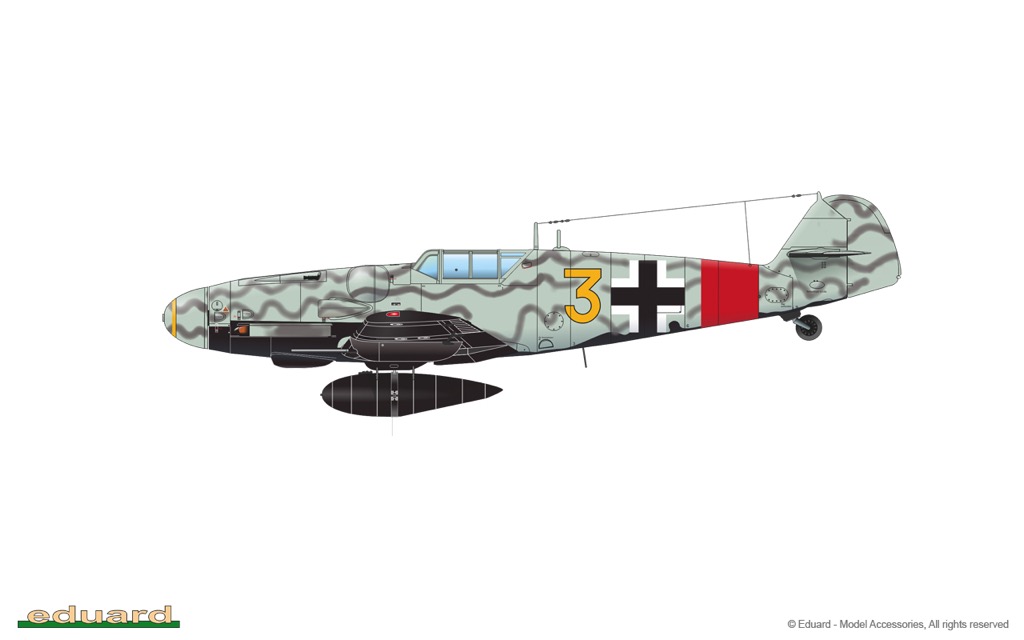 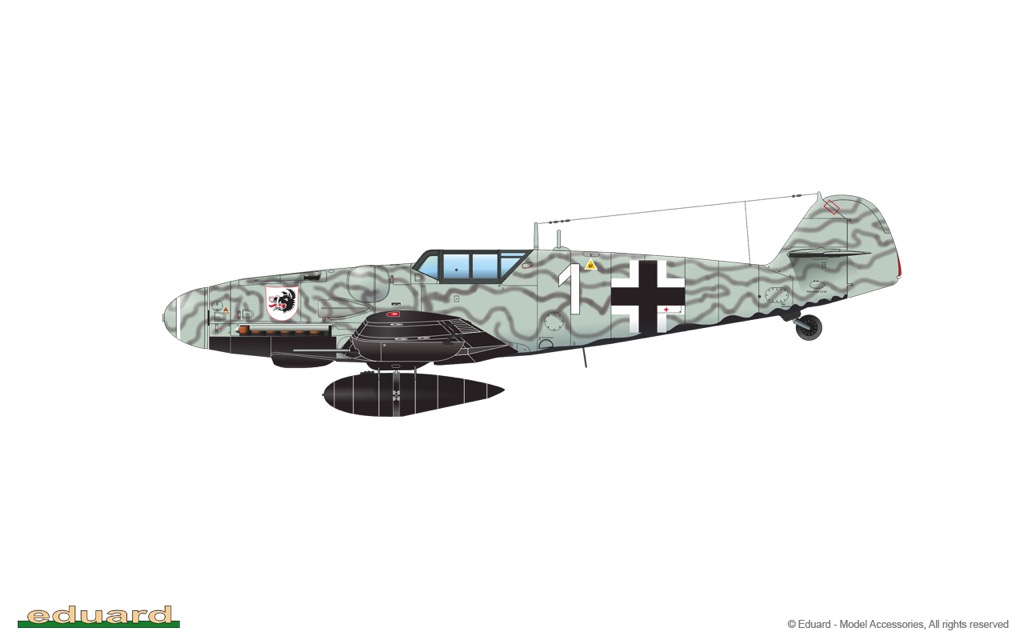 Bf 109G-6/R6, flown by Lt. Gerhard Pilz, 1./JG 300, Bonn-Hangelar, Germany, Autumn 1943
In the fall of 1943, I. Gruppe JG 300 began to undertake night missions intercepting attacking bombers. Their duties were to be carried out without the use of radar, the pilots relying only on their vision, their ability to spot the bombers against the backdrop of the sky or against the blazing targets already hit, against the detonations of flak or with the aid of searchlights. For this reason, the pilots for the unit were carefully selected on the basis of their blind flying experience, often utilising former Lufthansa pilots and pilots who had already accumulated night time raid experience. The camouflage scheme of this aircraft is composed of RLM 76 on the upper and side surfaces, with irregular application of RLM 74 or RLM 75. The lower surfaces, including the drop tanks, are sprayed RLM 22 Black. The JG 300 unit emblem is carried on the nose of the aircraft.

Bf 109G-6/R6, flown by Fw. Horst John, 3./JG 300, Bonn-Hangelar, Germany, September 1943
Some aircraft serving with JG 300 were equipped with a system from Eberspacher. This was essentially an acoustic pipe that was installed in the location of the first exhaust stub on both sides of the engine. The system gave off a tone that could be heard on the ground. It was intended to alert Flak crews to the presence of friendly aircraft and to prevent friendly fire instances. One so-equipped aircraft was Yellow '12' which was flown by Fw. Horst John with the 3. Staffel. While with JG 300, he claimed seven kills, and he was himself shot down on the night of November 18/19, 1943. The standard camouflage of his aircraft was darkened through the application of a squiggle pattern of RLM 22, 70, 74 and 75. The lower surfaces were oversprayed with RLM 22 Black. The national markings and the JG 300 identifiers were likewise oversprayed.

Bf 109G-6/R6, flown by Oblt. Gerhard Stamp, CO of 8./JG 300, Oldenburg, Germany, September - October 1943
A holder of the Knight's Cross, received for his successful service while with LG 1 in the fight for the Mediterranean, Oblt. Gerhard Stamp, flew with 8./JG 300 with this Bf 109G-6. The aircraft is interesting in its camouflage scheme, from which the previous owner can be ascertained. This was JG 11, as indicated by the horizontal yellow bar and the III. Gruppe marking under the cockpit. The lower surfaces and the national insignia were oversprayed with RLM 22 Black. Oblt. Stamp had his Knight's Cross award represented on the rudder of his airplane, as well as his biggest victories (a commercial vessel of some 35,000 BRT displacement, another larger commercial vessel, as well as the British destroyer 'Defender'). A white bar with a British national marking denoted the downing of a Lancaster on the night of September 23rd, 1943. The nose of the aircraft carries a clasp dedicated to bomber crews.

Bf 109G-6/R6, flown by Ofw. Arnold Doring, 2./JG 300, Bonn-Hangelar, Germany, October - November 1943
Arnold Doring was a native of Heilsberg in Eastern Prussia (today Lidzbark Warminski in Poland) and he joined the Luftwaffe in 1938. After the completion of his pilot training, he was assigned to the bomber unit KG 53, and in the summer of 1942, he was transferred to KG 55, operating on the Eastern Front. In the summer of 1943, he was reassigned to JG 300, first to the 2. Staffel, and from March 1944, to the 7. Staffel. Over the span of his service with JG 300, he downed eight enemy aircraft (five at night, three during daylight). In May 1944, Doring was transferred to NJG 2. On April 17th, 1945, he was awarded the Knight's Cross. After the war, he worked at the Deutsche Post, and on July 1st, 1957, he joined the newly reformed Bundesluftwaffe. He retired on March 31st, 1972. The lower surfaces of this aircraft built at Erla in Leipzig, were oversprayed in RLM 22 Black, and the same colour was used to overspray the national markings on the fuselage and on the wings. The JG 300 unit emblem is carried on the nose.

Bf 109G-5/R6, 3./JG 300, Bad Worishofen, Germany, Summer 1944
The Bf 109G-5 was built at Erla, and so they were always equipped with the small fairing on the right side of the engine cowl below the fuselage gun covers. The difference from this version and the Bf 109G-6 is the pressurized cockpit, with which all Bf 109G-5s were equipped. This Bf 109G-5 is camouflaged in the same manner as the example on Page 11. Judging by the yellow aircraft number, this airplane served with the 3. Staffel, and the red fuselage band ahead of the tail surfaces was applied to JG 300 aircraft serving with the Defence of the Reich. The Staffel colour was also applied to the spinner. This was sometimes applied as a strip, or, as in the case of this example, the entire forward portion of the spinner.

Bf 109G-6/R6, flown by Oblt. Alexander Graf Resseguier de Miremont, 10./JG 301, Targsorul-Nord (Ploesti), Romania, March - April 1944
The 10. Staffel JG 301 was sent to Romania at the beginning of 1944, tasked with the protection of the oil fields and refineries there, flying from the base at Targsorul-Nord. During the transfer to this area, the aircraft of this unit received the basic identifying features of those serving on the Eastern Front, yellow wing tips and a yellow fuselage band behind the fuselage cross. For better concealment, the fuselage was sprayed with RLM 76. A modified wilde Sau marking was applied to 10./JG 301 aircraft, a wild boar with a moon motif.

Bf 109G-6/R6, W. Nr. 412951, flown by Lt. Horst Prenzel, 1./JG 301, Gardelegen, Germany, July 1944
The dispatching of I. Gruppe JG 301 on the night of July 20nd/21st, 1944, over the invasion beaches meant the loss of two aircraft. As it turned out, Lt. Horst Prenzel, 1. Staffel CO and Fw. Manfred Gromill from the 3. Staffel as well, landed at Manston instead of their home field. As such, Lt. Prenzel delivered an undamaged aircraft to the enemy, while Fw. Gromill veered off the landing strip and damaged the landing gear and bottom surface of his plane. Neither pilot intended to captivity, and both through unrelated events to each other lost their bearings and mistook Manston as a field in occupied territory. The British used Prenzel's aircraft for testing at Farnborough. The aircraft was written off after suffering damage during a flight on November 23rd, 1944. White '16', in a standard camouflage scheme applied at Erla in Leipzig, carried cannons in underwing gondolas, and the right one was sprayed in black.

Bf 109G-6/R6, 2./JG 302, Helsinki, Finland, February 1944
Through February 1944, Soviet bombers conducted three night raids against Helsinki. The German Luftwaffe provided support for the Finns in the shape of twelve Messerschmitt Bf 109G-6/R6s from I. Gruppe JG 302 that landed on Finnish territory on February 12th. During the following two Soviet raids on the Finnish capital, six of the bombers were brought down. The unit returned to Germany on May 15th, 1944. The standard day camouflage of these machines was supplemented on the top and side surfaces with the addition of a snake pattern in white after arriving in Finland. The lower surface of the right wing was oversprayed in RLM 22 Black. An interesting feature of this aircraft was the application of black on the gondola under the left wing.

Bf 109G-6, flown by Fw. Fritz Gniffke, 6./JG 302, Ludwigslust, Germany, April 1944
Fritz Gniffke was a native of Gdansk and from his training days, had experience in blind flying. For this reason, he was assigned to wilde Sau pilot training in Altenburg in August 1943. After its completion, he was assigned to 6. Staffel JG 302. From April 1944, the duties of JG 300, 301 and 302 was expanded with the addition of day fighting where these units were not only tasked with night interceptions against raids, but also daylight intercepts of incoming enemy bomber formations. This was the reason behind the transfer of pilots with blind flying training on single-engined fighters to NJGr.10, commanded by Hptm. Muller. One pilot that this concerned was Fw. Gniffke. In April 1944, Fw Gniffke flew this aircraft, coded Yellow '7'. The plane carried a standard Luftwaffe day fighter camouflage scheme with a red fuselage band, the marking that identified this aircraft as belonging to JG 302 within the Defence of the Reich system. The markings on this plane included a small 'N' ('N' for Nacht), and was a reference to its use as a nightfighter.

Bf 109G-6, 2./JG 302, Gotzendorf, Germany, July 1944
JG 302 was the final Geschwader that carried the job description of night interception of bombers using single engined day fighters and the wilde Sau tactic. It was formed on November 1st, 1943. As was the case with the two previous units, this one also utilised the services of pilots who were capable in the field of blind flying, most often hailing from bomber units or from Lufthansa. In May 1944, I. Gruppe was moved to Vienna, and by this time, the task of the unit was no longer night fighting, but had reverted back to classic day fighting. At the time, it was busy with American bomber wave and their fighter escort interception duties that were attacking industrial centres around Vienna, Budapest and Bratislava. The camouflage of Black '11' was composed of RLM 74/75 on the upper and side surfaces, and the bottom surfaces were sprayed in RLM 76. The camouflage scheme was rounded out by the addition of Eastern Front identifying features in the form of yellow wing tips and a red fuselage band ahead of the tail surfaces denoting JG 302 aircraft operating within the realm of the Defence of the Reich system. The nose carried the JG 302 unit insignia, a devil with a pitchfork s