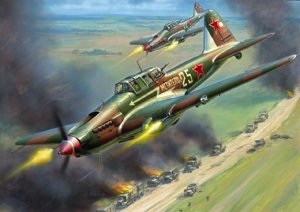 The Ilyushin Il-2 Shturmovik was one of the most formidable ground attack aircraft of World War II, and was produced by the Soviet Union in huge numbers; a total of 36,163 according to one source. It is believed to be the most produced aircraft in all of aviation history.

It was originally designed by Sergey Ilyushin and his team at the Central Design Bureau in 1938, as a two-seat aircraft with an armored shell weighing 1,540 pounds (15% of the aircraft's gross weight) protecting crew, engine, radiators, and the fuel tank. The prototype, named the BSh-2, first flew on December 30, 1939. However, this was rejected in favor of a lighter single-seat design, the TsKB-57, which first flew October 12, 1940.

This version was officially designated Il-2, and started large-scale production in early 1941, with the first deliveries coming in May, just in time for the German invasion. The Il-2 proved itself to be a deadly weapon against German transport and armor, but was itself vulnerable to fighter attack, and so in February 1942 the two-seat design was revived.

The two-seat version was called IL-2M, and differed by having a rear gunner's position under a lengthened canopy. These modified versions started appearing in September 1942, and eventually existing single-seaters were modified also. Later changes included an upgrade from 20-mm to 23-mm cannons, aerodynamic improvements, use of wooden outer wing panels instead of metal, and increased fuel capacity.