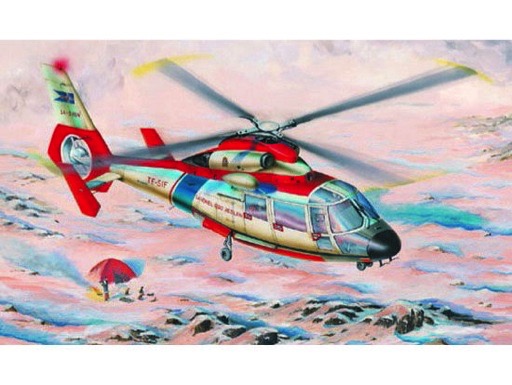 As a replacement for the "Skylark" Helicopter, Aerospatiale started planning the "Dauphin" helicopter between 1968 and 1969. In June 1972 the prototype test flight was conducted. The SA365N , whose maiden fight was made in March 1979,was the modified version of SA365C. There were a number of modifications made such as enlarging the rear fotor and changes to the nose, cabin door and blades. Further changes from the SA360 Dauphin were made, including the use of twin engines instead of a single; the front landing gear was turned into triangular to a front triangular shape in order to reduce air resistance. By January 1986, there were 362 SA365N imported by 34 countries. The Harbin Aero-Industrial Corp of China manufactured fifty SA365N/N1 Dauphins under license and these were used for both military and civilian purposes. In 1994 domestically produced parts were adopted into the production of another 30 Dauphins including new engines.